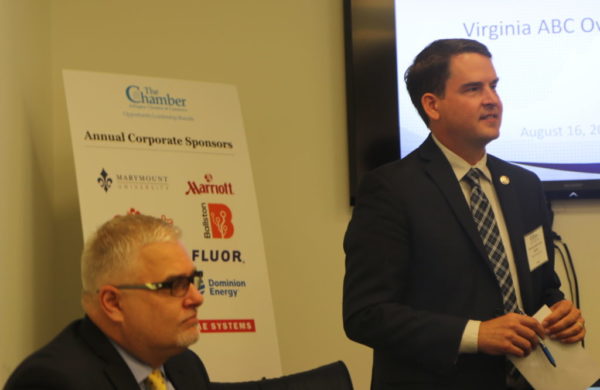 Virginia lawmakers are considering loosening some state alcohol regulations in the coming months — and that could be good news for Arlington’s bars and restaurants.

The General Assembly is weighing a bevy of changes to how the state’s Alcoholic Beverage Control authority, commonly known as the ABC, hands out licenses and permits to better match the ever-evolving beverage business.

Changes could include a big reduction in the types of permits the ABC hands out, or perhaps even a change in regulations dictating how much food businesses need to sell if they’re also offering liquor. All that and more were tweaks offered up by ABC officials and state lawmakers to local business owners at a gathering hosted by the Arlington Chamber of Commerce Thursday (Aug. 16), as part of a bid to connect the business community to its regulators.

“We’re trying to look for a concept that does free up the market a little bit, without getting to the point that we have bars on every corner,” said Tom Kirby, ABC’s acting chief of law enforcement.

A particularly popular option offered up by Kirby and his colleagues: somehow adjusting ABC’s current requirement that businesses maintain a 45 percent to 55 percent split between food and mixed drink sales. Beer and wine sales are exempted from that requirement, yet some bars and restaurants still find themselves challenged by that standard.

Freddie Lutz, owner of Freddie’s Beach Bar in Crystal City, recounted that he’s had several slow winters where he’s bumped up against those limits, largely thanks to competition from bars in D.C. and Maryland. Accordingly, he’d be quite happy indeed to see those limits change, particularly as he prepares to open another restaurant in Crystal City.

“I just want to see that ratio tweaked just enough to not get gray hair over it,” Lutz said.

To that end, Kirby said his agency could work with lawmakers to bump the food standard down to 35 percent of gross sales, or even offer exemptions at certain levels of sales.

State Sen. Jeremy McPike, D-29th District, currently sits on a subcommittee examining ABC issues, which he says is weighing even more targeted fixes. For instance, lawmakers could measure how much liquor bars sell by volume to determine a balance between food and drink, instead of looking at the dollar amount of sales.

The goal of the limit in the first place is, after all, to prevent bar patrons from being overserved.

“What if you have a higher-priced shot that costs like $150?” McPike said. “Think about how much you need to sell to make up for that.”

ABC officials stressed that such a change would in the agency’s interest as well — Chris Curtis, secretary to the ABC’s board, noted its employees spend roughly “10,400 man hours” each year monitoring whether restaurants are complying with the food-drink split.

“But I’m sure that pales in comparison to the amount of time you all have to spend sending us this information,” Curtis said.

Another possible change the ABC could consider is issuing a new type of permit to let bar patrons bring their beverages outside into a common area shared by multiple businesses. McPike suggested that local governments, or even business improvement districts, could manage the process, allowing for more events drawing in a variety of restaurants in a small area.

Kate Bates, the chamber’s president and CEO, noted that Rosslyn businesses have long hoped to offer events pulling in all the neighborhood’s different bars, but have run into challenges letting people easily move between different establishments if they’re too far away from each.

Similarly, Cassie Hurley, events manager for the Crystal City BID, suggested that her group “would love to do something similar to 6th Street in Austin, [Texas] on 23rd Street” to let people bring their drinks into stores along the small strip.

Kirby says ABC is receptive to the idea, though he did caution that inevitably there will be enforcement issues to consider, considering that revelers could easily get carried away and leave the permitted boundaries for such activities.

Complicating matters further are the political realities of Richmond — the needs of Northern Virginia businesses are quite different from those in Southwest Virginia, where, as McPike pointed out, there are still some dry counties left.

Progress could certainly be slow in some areas, as lawmakers will only meet for a short legislative session next year with more elections on the way. And, as Sen. Adam Ebbin, D-30th District, noted “it’s rare that we rewrite whole code sections all at the same time.”

But Kirby underscored that ABC is willing to work with lawmakers to ensure everyone is a bit more satisfied with the entire regulatory framework.

“There is a lot of agreement that we need to do something differently,” Kirby said.