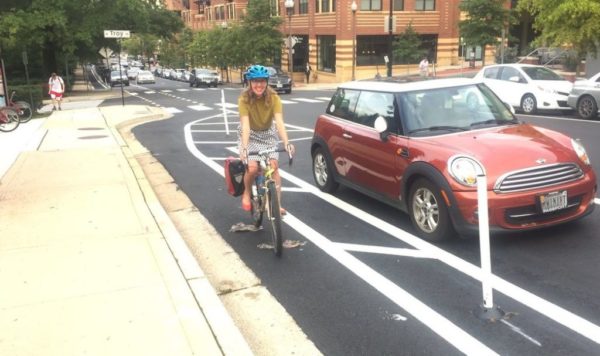 Arlington’s opened up another protected bike lane, this time connecting Rosslyn and Courthouse.

This newest lane runs along Wilson Blvd, between N. Quinn Street and N. Courthouse Road near the post office in the area. The county previously built a protected lane between N. Oak and N. Quinn Streets back in 2016.

It starts at N Quinn Street in Rosslyn and travels up the hill, ending just before the post office in Courthouse.@ArlingtonDES is on a roll!#protectedbikelanes #rosslynva #bikedc pic.twitter.com/0xoB6t1ApE

In the early going, at least, the new lane seems to be a hit for cyclists and scooter fans alike.

The county’s added several new protected bike lanes this summer, including one along N. Veitch Street near this latest addition, as part of summer paving work around Arlington.