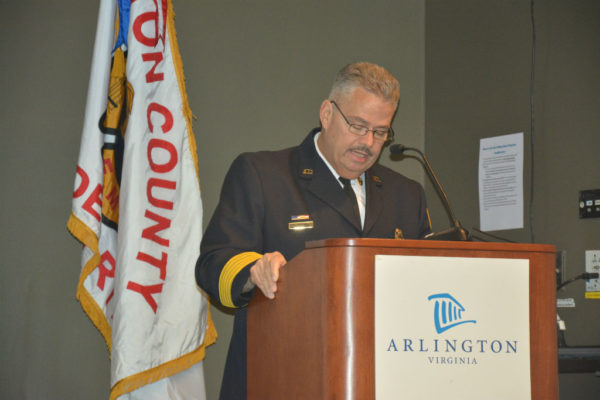 Arlington’s fire chief has officially stepped away from his post, leaving the department under interim leadership as a search for a permanent replacement continues.

Chief James Bonzano’s last day on the job was this past Friday (Aug. 24), fire department spokesman Ben O’Bryant told ARLnow. The county’s been searching for a new chief since early May, when Bonzano decided to bring his 34-year career to a close. He served as county fire chief for about three years in all.

O’Bryant said that Assistant Chief Joseph Reshetar will step in as acting chief while the county’s search continues. Reshetar has served in that same role before, back in 2015 when then-Fire Chief James Schwartz was appointed deputy county manager, so O’Bryant expects that “it will be a smooth transition between now and when the new chief starts.”

He added that the county’s human resources team is still interviewing candidates for the permanent post, with the ultimate goal of having a new chief leading the department “before November.”

A job listing on the county’s careers website remains active, though it notes the county will give preference to candidates who applied by June 4. It lists the annual salary range for the post as between $117,145.60 and $224,806.40.