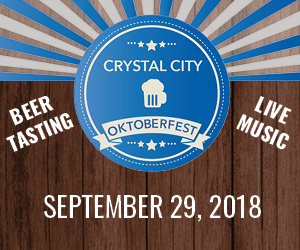 Northern Virginia’s largest Oktoberfest is coming to Crystal City. On Sept. 29, 220 20th Street will play host to the first time to over 100 craft beers from over 50 regional breweries.

Tickets to the event are $30 if purchased in advance, or $45 at the door. Tickets give visitors entry into the festival and live entertainment, as well as ten beer sampling tickets along with a custom mug to fill.

VIP tickets, $50 in advance or $65 at the door, includes 15 beer sampling tickets, early access, a private tent and private bathrooms.

In addition to German food, the Oktoberfest will host various food trucks serving things like New York-style pizza or tacos.

But the Crystal City Oktoberfest isn’t the only one in Arlington this fall. In the wake of the closure of Capitol City Brewing, hosts of Shirlington’s annual Oktoberfest, New District Brewing is taking up the mantle and expanding its “Arlington ValleyFest” on Sept. 30.

The festival will take place at 2709 S. Oakland Street. While the event will have plenty of beer, the focus will also be on promoting local arts.

Meanwhile, on Oct. 20, the Copperwood Tavern on 4021 Campbell Ave. will also be hosting their “Shucktoberfest”, an event co-sponsored by Northern Neck’s Waverly Point Oyster Company, highlighting beer and oysters as a major draw.