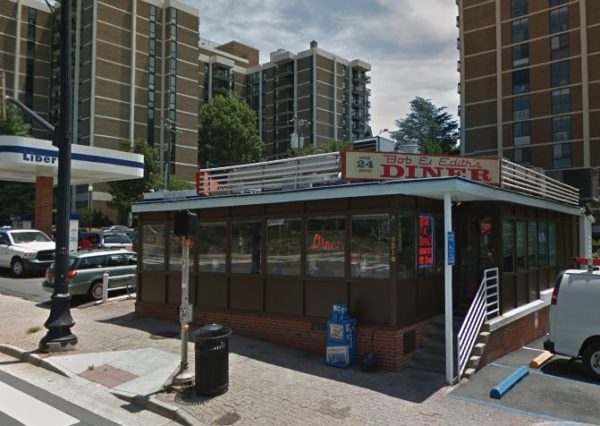 The building that’s been home to the original Bob and Edith’s Diner for the last 50 years is now listed for sale.

The real estate and development firm BM Smith is advertising the diner, located at 2310 Columbia Pike, for sale with an asking price of $2.5 million. Yet what that means for the restaurant chain, which operates four locations around Northern Virginia, remains unclear.

An attorney for Greg Bolton, the owner of Bob and Edith’s, did not immediately respond to a request for comment, nor did the listing agent for the property at BM Smith.

The Bolton family opened the chain at the Columbia Pike location back in 1969, though county records show that a company controlled by BM Smith — the owner of a variety of other South Arlington properties — took over ownership of the location in 2015.

The chain opened two new locations that same year, and even acquired Linda’s Cafe along Lee Highway this year with plans to eventually expand there as well.

Jonathan Reed, a local realtor, first drew attention to the Bob and Edith’s listing when he shared BM Smith’s posting on his own website this week. As a longtime Arlington resident, he told ARLnow he was “shocked” to see the space listed on an internal database for realtors, and has even since directed two potential buyers to BM Smith since sharing the post.

Based on Reed’s examination of the listing, he believes Bob and Edith’s has a “four-year term” left on its current lease, and could opt to renew the lease for another term. Accordingly, he isn’t so sure that the building being listed for sale necessarily means the restaurant is on the move, though it certainly could be.

“It doesn’t seem like they’re closing or leaving, it could be that they opted not to buy the place,” Reed said. “Of course, there could be someone that buys it that doesn’t want to continue their lease… but whoever buys it will have to contend with the lease that’s already there.”