Solace Brewing Company opened it’s doors just over a year ago in Sterling, VA. You may remember our article from last year about them.

Saying that they had a good first year is an understatement. We knew something special was in the works, and their liquid was proof. Now the proof is in the numbers. 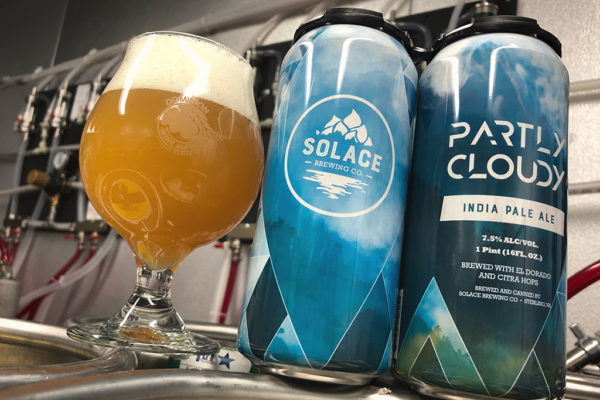 Solace opened its doors to allowing customers to enjoy their beer to go via growlers. They have since added a crowler machine and are now canning two of their beers.

Distribution was in the business plan from the beginning, starting in Northern Virginia and Washington, D.C. and now expanding into Maryland this week. I stopped by the brewery to check out their stylish new cans that were fresh off the canning line.

Partly Cloudy is a 7.5% IPA that has become a staple in their line-up, and a great seller for us, the brewery and many others. This week they added it to their can rotation (in addition to Sun’s Out, Hops Out) to make two cans available to-go at the brewery and across their original distribution footprint. We just got our first drop of Partly Cloudy cans and have stacked it up right next to Sun’s Out Hops Out.

If their one year mark is a sign of what is to come then I think we can all agree to buckle up for a great year two. Solace has two more tanks on order. They also plan to can Lucy Juicy Double IPA in the next month or so as well as several other one-offs and experimental brews beyond that.

Grab some Solace this weekend when you come see us or check out the brewery if you haven’t already. You will thank me later.

Partly Cloudy will be open in our Weekly Beer Tasting this Friday, September 21st from 5:00-7:00 p.m.. Our sister store, Downtown Crown Wine and Beer (Gaithersburg, MD) will be tapping their beers for the first time in Maryland this weekend as well. #findyoursolace