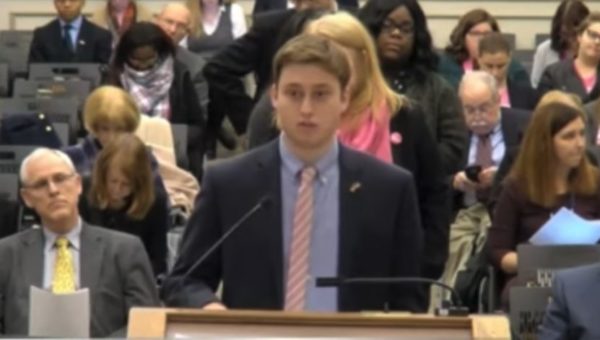 (Updated at 4:15 p.m.) The Arlington Young Democrats are weighing a new push to convince the county school system to change its sex education policies, though state law could limit the scope of their advocacy.

The concern of some of the group’s members is that Arlington Public Schools still includes abstinence as part of its “family life education curriculum,” a focus that researchers believe does little to address teen pregnancy or the spread of sexually transmitted infections. Any eventual lobbying effort could center on urging the School Board and Superintendent Patrick Murphy to do away with any mention of abstinence in APS sex education, and concentrate primarily on contraceptives and sexual health instead.

The specifics of what changes the AYDs may ask for and how they might advocate for them is still unclear, however. Tania Bougebrayel, the group’s president, told ARLnow that “sex education policy is on our agenda of important issues this year” and members are still “gathering information” before launching a formal effort in the coming months.

Yet the group could well run into one important roadblock: the strictures set by state law.

Virginia’s “Standards of Learning” gives school systems some latitude to design their own sex education curricula, but it does come with basic requirements they all must meet — among them is an emphasis on “abstinence education” and “the value of postponing sexual activity.” And as school spokesman Frank Bellavia points out, “APS does not have the ability to change state SOL curriculum that is set by the commonwealth.”

“However, we do broaden the scope to be more open and to teach more comprehensively,” Bellavia said. “For example, when the SOL states, ‘abstaining until marriage,’ our instruction also references ‘mature/committed relationships,’ not just marriage. Families also receive a letter annually in the first day packet and have the ability to ‘opt-out’ of any part of the FLE curriculum.”

However, Graham Weinschenk, a Yorktown High School alum who has worked with the AYDs in the past, believes the school system may have more flexibility than it’s letting on.

He’s tracked the issue of sex education closely since working with local state lawmakers to introduce legislation on the subject, and he points out that the Board agreed to revise its FLE policies just this June. The Board agreed to remove a good many of the details from its old policy in favor of broad guidelines, giving Murphy the chance to create a new “policy implementation plan” and sketch out new specifics in the coming months.

“Arlington is kind of at a pivotal moment, and I think [the AYDs] can do a lot in shaping that policy,” Weinschenk said. “There’s more room to make changes now than there was under the old policy.”

Bellavia said staff are currently working on the policy specifics, and they “don’t have a timeline for when it will be completed.”

But Weinschenk is optimistic about the prospect of committed advocacy making a difference in bringing more “medically accurate sex ed” to Arlington. He fully expects that APS could remove any mention of abstinence from its curriculum as part of the policy revision process, noting that the state standards for sex education “are really just guidelines.”

Such a change would be well worth the effort, in Weinschenk’s mind. He points to research suggesting that even mentioning abstinence in sex education classes “undermines the entire process” by sending mixed messages to students” and can stigmatize students who are having sex.

“I totally understand that it makes complete logical sense to at least mention abstinence, I hear that from parents all the time,” Weinschenk said. “But if you look at the science and believe the science, then we shouldn’t have this in our program.”

That’s part of why Weinschenk worked with lawmakers to introduce bills last year to remove references to abstinence in the state guidelines. But with Republicans controlling both chambers of the General Assembly, that legislation has yet to make it out of committee.

Weinschenk is hopeful that he’ll have more success in next year’s legislative session, especially with Democrats just one seat short of a majority in both chambers, but he believes local action is the surest path toward progress in the near term.

Depending on the exact avenue the AYDs decide to pursue, such an effort could require the backing of the School Board, and there’s no telling how they might lean on the issue. For her part, Board member Barbara Kanninen, the lone member up for re-election this year, said through a spokesman that she supports “the Young Democrats’ advocacy at the state level for factual, inclusive, best practice teaching,” but wouldn’t address efforts at the local level.

Weinschenk acknowledges that these changes can be difficult, even in progressive communities like Arlington, but he expects politicians and parents alike could eventually be convinced.

“This problem seems solvable, so I’m trying to solve it,” Weinschenk said.