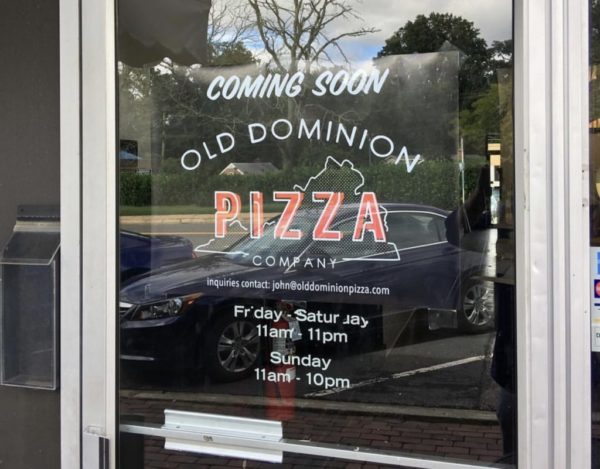 Just a few months after Upper Crust Pizzeria shut down along Lee Highway, a new pizza shop is now set to take its place.

Rodas, who also helps run The Spirits of ’76 bar in Clarendon, says he’s still sorting out the menu for the new restaurant, but hopes Old Dominion will become a “good, local, neighborhood pizza place.”

He says he’d long enjoyed getting pizza at Upper Crust, but thought the restaurant’s management was a bit lacking. He even considered what he might do differently with the space.

“I remember saying, ‘If this spot ever comes open, I would love to put a nice neighborhood pizza place here,” Rodas said.

Accordingly, when Rodas saw ARLnow’s story on the store’s closure this July, he jumped at the chance to lease the space.

“I’d always wanted to do something in the neighborhood, but it wasn’t something I already had plans in the works for,” Rodas said. “But when I saw that it was closed, I drove right over there.”

He says he signed a lease for the space a few months ago, working in tandem with his chef at Spirits of ’76, Charles Smith, who is helping to design Old Dominion’s menu and will have an ownership stake in the pizzeria.

Rodas adds that the restaurant will deliver, and he plans to offer wine and beer in the space, though he expects the lengthy permit application process means the restaurant might not have it available as soon as it opens. As for that opening date, he’s currently hoping to start welcoming customers sometime in December.

Rodas is well aware that it might seem a bit strange to open up a new pizzeria in the same space as one that just failed, but he’s hoping that he’ll be able to bring a bit of what has made his Clarendon bar a success over to this new venture.

“We’re lucky to have great employees there, who take pride in the place and we have great customer service there,” Rodas said. “You know the guys who own the place and who work there… and we want to bring that over to Old Dominion.”