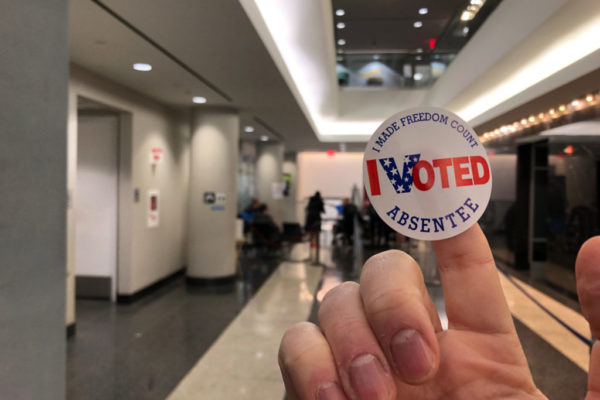 Elections around Arlington may not attract the sort of expensive TV ads that have come to dominate local stations ahead of the midterm elections, but candidates around the county have shelled out thousands to bring their messages to Facebook.

An ARLnow analysis of the social media site’s political ad database shows that Arlington’s six candidates for Congress and local office on the ballot this fall have combined with the county’s party committees to buy 549 Facebook ads from Jan. 1 through today (Oct. 29).

Thomas Oh, the Republican mounting a longshot bid to unseat Rep. Don Beyer (D-8th District), led the way among the county’s candidates, buying 100 ads on the site since launching his campaign in February. According to campaign finance reports, he shelled out about $2,100 to pay for those posts.

But Oh was far from the bigger user of Facebook ads in Arlington — that distinction belongs to the Arlington Young Democrats, who have purchased 270 ads on the platform over the course of the year. The Arlington County Democratic Committee wasn’t far behind, buying 91 ads.

The county’s candidates for local office have relied on social media advertising a bit less, but have still used Facebook to reach thousands of potential voters.

In the lone race for a County Board seat this year, pitting independent incumbent John Vihstadt against Democrat Matt de Ferranti, the challenger has run a bit more Facebook ads so far.

According to Facebook’s database, de Ferranti has run 34 ads on the platform since launching his campaign in January. Records show he’s spent nearly $1,900 on Facebook ads in all, though campaign finance documents only detail spending through end of September — candidates will release their final reports of the campaign later this week.

Of the Democrat’s ads, 19 ran in the run-up to his primary victory over Chanda Choun in June, with 15 reserved for the general election contest with Vihstadt. In general, de Ferranti’s ad buys have each been less than $100 each, with only seven falling in the range of $100 to $500 — Facebook only provides ranges, not specific numbers, for spending and traffic figures.

By contrast, Vihstadt has only run 10 ads on Facebook so far. His current campaign finance reports only show him spending about $100 on the posts, but he’s ramped up his activity on Facebook in October, meaning his spending will be reflected in the next set of reports.

In the contest for the only School Board seat on the ballot, independent (and frequent candidate) Audrey Clement has outpaced incumbent Barbara Kanninen, who has the endorsement of local Democrats in the nominally nonpartisan race.

Clement has run 32 ads this year, spending about $1,520, according to campaign finance reports. She’s only spent more than $100 on three separate ad buys, but she’s still managed to reach plenty of people. Eight of her ads have secured between 5,000 and 10,000 and impressions, while two have managed between 10,000 and 50,000.

Beyer appears not to have a run single ad on Facebook, despite raising more than $1.9 million over the course of his bid for a third term in Congress. However, he has benefitted from plenty of ads touting his candidacy from the local Democratic committee and the Young Democrats.

Oh faces quite the uphill battle to best Beyer, considering that the 8th (covering all of Arlington and parts of Alexandria) is among the safest districts for Democrats in the country. But the first-time candidate has managed to attract some attention to his Facebook ads at least, with four attracting between 10,000 and 50,000 impressions and seven attracting between 5,000 and 10,000. He’s spent more than $100 on seven different ad buys, which has surely helped boost those traffic numbers.

Facebook’s records don’t show any evidence of any ad spending from the county’s Republican committee, or its Green Party.

Disclosure: both Clement and Vihstadt have purchased ads on ARLnow.com. Flickr pool photo via wolfkann