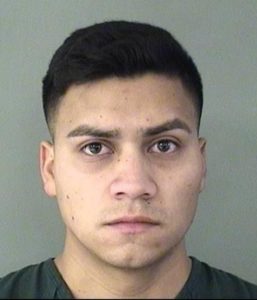 A woman was murdered in a Crystal City hotel room this morning and a Stafford, Virginia man has been arrested and charged in her death.

Officers were initially dispatched to a hotel on the 1700 block of Jefferson Davis Highway — the Crystal Gateway Marriott is the only hotel on that block — “for the report of a possible death.”

Stafford resident Natasha Rivera, 20, was found dead in the room. Rodolfo Rivera, 24, was arrested and charged with murder.

This is the third reported homicide in Arlington so far this year.

Arlington County Police announce the arrest of a Stafford, Virginia man following a domestic-related homicide investigation in Crystal City. Rodolfo Rivera, 24, was arrested and charged with Murder. He is being held without bond in the Arlington County Detention Facility.

At approximately 9:40 a.m. on November 3, police were dispatched to the 1700 block of Jefferson Davis Highway for the report of a possible death. Upon arrival, officers located a female victim deceased inside a hotel room. The suspect was on scene when police arrived and taken into custody without incident.

The victim has been identified as Natasha Rivera, 20, of Stafford, Virginia. Cause of death will be determined by the Office of the Chief Medical Examiner.