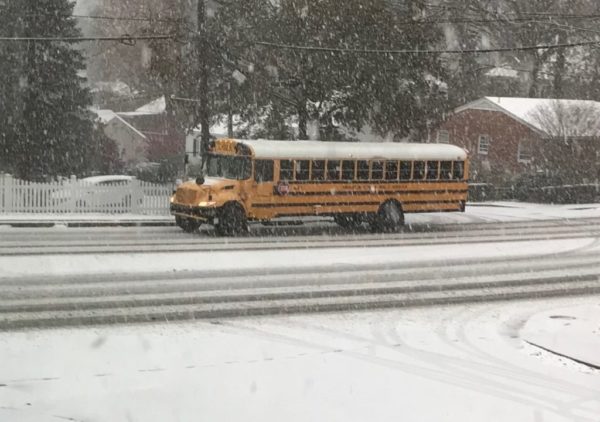 About an inch of wet snow has fallen, covering roads and sidewalks. A number of crashes have been reported around the county, per scanner traffic, and at least one school bus has gotten stuck on a snow-covered street. Another crash involving a bus has been reported on S. George Mason Drive in front of the National Guard center.

ART buses, meanwhile, have been delayed due to the winter precipitation. Per ART:

ART Routes 41,45,62,75,77,and 84 are experiencing delays/operating issues due to icy/slippery road conditions.  Road Supervisors, Safety and Maintenance Technicians are assisting Operators. We apologize for the inconvenience.

The federal government is also open on time today, with the option for some employees to telework.

Arlington County Police and other agencies are urging drivers to be careful on the road.

Slop starting to stick in places. Go slower because you never know. pic.twitter.com/xSfgRdETZT

The snow may not accumulate enough to require shoveling but it does require you to completely clear your windshields before heading out. Slow down, plan extra travel time and drive for the conditions. ❄️ #ArlWx pic.twitter.com/kpVBQzwxQK

@ARLnowDOTcom Virginia Square at around 8am. Causing drivers some trouble. pic.twitter.com/ZEWcndTRui

@ARLnowDOTcom @APSVirginia Nice job Arlington. I just spent 30 minutes trying to go 3 blocks to get out of my neighborhood. Cars sliding up and down hills and buses crashing on Walter Reed. pic.twitter.com/pKrsWEhL7k

Yorktown Blvd on the way to Discovery. Stalled trucks and buses pic.twitter.com/YijrVKjt4J

Sleet is continuing to fall in North Arlington. We’ve been hearing fewer reports of problems on the roads over the past 30 minutes or so, but motorists should continue driving cautiously.