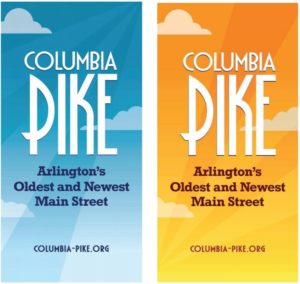 Columbia Pike is now set to see dozens of new banners adorn its street poles, as part of a bid to tie communities along the highway together.

The Columbia Pike Revitalization Organization announced that it’d begin installing 70 of the new banners on a four-mile section of the Pike last week.

The County Board signed off on the new pennants this summer, with some set to proclaim the area as “Arlington’s Oldest and Newest Main Street” and others advertising local events like movie nights and farmers markets.

“This four-mile stretch of ‘The Pike’ represents Arlington’s most diverse community with nearly 72,000 residents, roughly 38 percent of Arlington County’s entire population,” CPRO Board President John Snyder wrote in a statement. “The Pike represents an opportunity for place-making, for celebration and for economic development. And Columbia Pike’s 10 neighborhoods are also immediately adjacent to Crystal City, the newly announced headquarters for Amazon.”

Then, as work wraps up on utility undergrounding and streetscape improvements along the highway in the coming months, CPRO will add more banners on the road between S. Dinwiddie and S. Jefferson streets. That will include the area surrounding the “Centro Arlington” development taking the place of the old Food Star grocery store near the Pike’s intersection with S. George Mason Drive.

CPRO is paying for the banners with help of grants from the county, the Washington Forrest Foundation and the Virginia Main Street Affiliate Program, according to a news release.

The nonprofit first started developing the banner program in tandem with the County Board last year in order to “visually unify” the area and “highlight the major development areas where ongoing Pike events take place,” the release added.