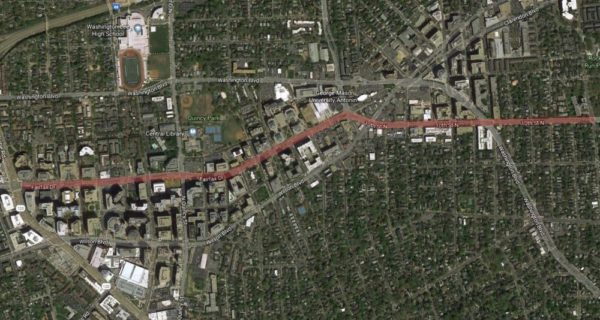 County officials are planning some improvements along Fairfax Drive and 10th Street N. as the roads run from Ballston to Clarendon, with a special focus on ways to make the corridor safer for drivers, pedestrians and cyclists alike.

Arlington transportation planners are circulating a survey seeking feedback on how the roads should change, as the county weighs a series of modest improvements over the next few months. In all, the study area stretches from Fairfax Drive’s intersection with N. Glebe Road in Ballston to 10th Street N.’s intersection with N. Barton Street in Lyon Park.

The county is envisioning changes along the 1.5-mile-long stretch of road as “short-term, quick-build projects to enhance safety and mobility on the corridor.” Officials hope to eventually commission more expansive changes, after it took over management of the roads from the state this summer, but the county’s budget crunch means that options are limited, for now.

But, in the near term, the county plans to examine “multimodal traffic volume data, curbspace use, crash data, and transit service data” in addition to the community’s feedback to chart out small-scale changes, according to a project webpage.

The advocates with the group Sustainable Mobility for Arlington County certainly have some suggestions for the corridor. The group sent an email to its members urging them to advocate for the transformation of Fairfax Drive into a “low-stress biking corridor, even if it requires re-purposing space from motor vehicles,” in addition to other cycling improvements.

“The existing Fairfax Drive bike lanes are narrow, frequently blocked, and fail to be low-stress due to fast-moving traffic,” the advocates wrote. “The existing, short two-way protected bike lane should be extended all the way from Glebe Road to Clarendon Circle.”

“This makes the corridor a barrier,” they wrote. “Additional safe crossings should be provided and these crossings must be simple and easy to use for cyclists as well as pedestrians.”

The county survey on road improvements will be open for submissions through Dec. 16. Officials hope to have short-term recommendations ready by sometime early next year, then install those by the spring or summer of 2019.

Read more →
More Stories
The Right Note: Get Ready to Pay MoreI-CE-NY Set to Open Today in Village at Shirlington