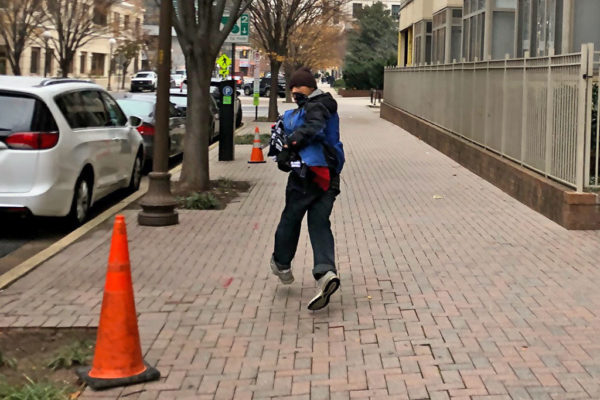 Geoff Collins was about to get lunch in Ballston on Friday when he witnessed what appeared to be a theft in progress.

A Macy’s employee was yelling at a man who had just run out of the store, carrying an arm-full of underwear. As the man crossed Wilson Blvd, Collins decided to give chase.

He never caught up to the man, but he did get a photo, which he emailed to ARLnow along with his story of what happened:

This morning around 11:40 a.m. on the 4300 block of Wilson Blvd in Ballston I witnessed a man running out of the Macy’s store carrying an arm full of men’s underwear. A store employee on her lunch break was screaming something in his direction as he ran across Wilson Blvd and up N. Taylor Street. I began pursuing him and took out my camera and yelled “hey, buddy” at which point he turned around for the attached photo. He immediately dropped the merchandise on the sidewalk and kept running toward Fairfax Drive. I picked up the merchandise, returned it to the store, and called the police. They came by about 10 minutes later and I filed a police report.

Collins said police took awhile to show up and get his side of the story. The officer never asked for the photo he took.

Police describe the incident as a “minor dispute.” No charges were filed.

“At approximately 11:49 a.m. on November 30, police were dispatched to the 700 block of N. Glebe Road for the report of a larceny just occurred,” said Arlington County Police Department spokeswoman Ashley Savage. “The investigation determined this incident was a resolved minor dispute.”

Savage noted that police discourage residents from chasing alleged criminals through the streets.

“For your safety, citizens are not encouraged to chase suspects, however, they are encouraged to be active witnesses and report criminal activity to police at 703-558-2222 or 9-1-1 in an emergency,” she said. “Information provided to dispatch should include a suspect description, location, method and direction of travel.”