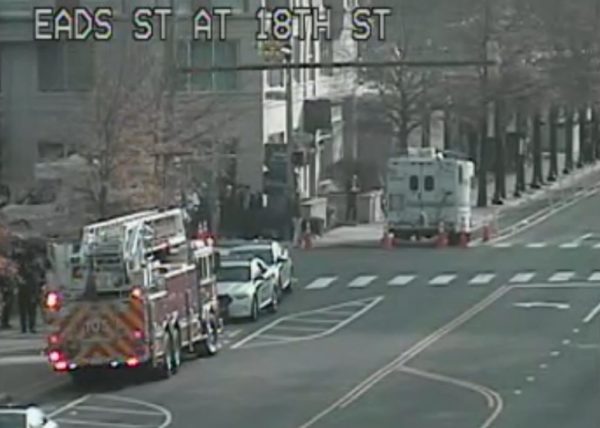 (Updated at 4 p.m.) An office building in Crystal City has been evacuated after a company inside reportedly received a bomb threat via email.

Police and firefighters were first dispatched to 1919 S. Eads Street for a report of a bomb threat around 2:15 p.m. Among the building’s tenants are the Consumer Technology Association and Inside Washington Publishers.

Shortly after the initial dispatch, it was reported that the fire alarm in the building was sounding and people were evacuating.

This is the second bomb threat to prompt an office evacuation in Crystal City so far this month.

Meanwhile, another emailed bomb threat has been reported at 4300 Wilson Blvd in Rosslyn, headquarters to energy company AES and home to other offices and retail businesses.

News outlets are reporting that “dozens” of bomb threats have been reported at news outlets and other businesses and institutions across the U.S., though the threats are not believed to be credible. The FBI is monitoring the situation, both in the D.C. area and nationwide.

NYPD Counterterrorism Bureau chief: “We are currently monitoring multiple bomb threats that have been sent electronically to various locations throughout the city. These threats are also being reported to other locations nationwide and are not considered credible at this time.”