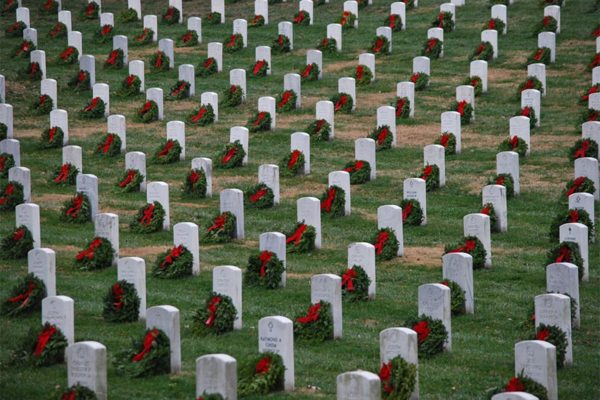 Anyone planning on heading to Arlington National Cemetery for this weekend’s “Wreaths Across America” event might want to consider using public transit to get there, or prepare for some hefty delays.

ANC officials say they’ll be barring all personal vehicles from the cemetery’s grounds during the length of the annual wreath-laying event, set to run from 8 a.m. to 3 p.m. Saturday (Dec. 15).

They’re also planning on welcoming a larger number of volunteers at the event than in years past, prompting “numerous changes to ensure the safety and security of those who participate,” according to a press release. Accordingly, officials are urging participants to arrive promptly at 8 a.m., and rely on Metro, if at all possible.

“We encourage all volunteers to arrive early and recommend taking the Pentagon or Rosslyn Metro and walking into the cemetery,”ANC Operations Director Micheal Migliara wrote in a statement. “It’s a short, 15-minute walk from these stops and the most seamless way to access our hallowed grounds on this special day.”

The Arlington National Cemetery Welcome Center parking garage, however, will only be available to “ANC Family Pass holders” who have preregistered for the event.

All the cemetery’s gates will open to the public at 8 a.m., followed by an opening ceremony inside the cemetery at the McClellan Gate at 8:30 a.m. The wreath laying is set to start by 9 a.m.

County police are also warning of traffic changes starting at 5 a.m., including: