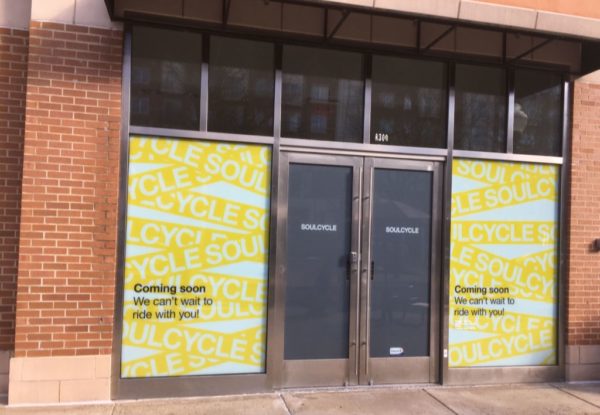 SoulCycle is officially opening a new studio in Clarendon, meaning that Arlington will soon be the home of the popular company’s first expansion into Virginia.

The company recently posted signs saying a new location is on the way for a space 2700 Clarendon Blvd, in “The Loop” section of the Market Common Clarendon development. The studio will sit next to the Apple store and the “Origins” cosmetics store.

Permit applications last month initially indicated that SoulCycle was mulling an expansion to Clarendon, but the company previously declined to discuss its plans for the area.

Now that things have firmed up a bit, however, a SoulCycle spokesperson told ARLnow that the company is “aiming for late May, early June” to open the new studio. County permit records show that the studio will occupy both the first and second floors of the building.

The owner of the Market Common property, Regency Centers, previously used the storefront set to welcome SoulCycle to display information about the impending redevelopment of its other properties across Clarendon Blvd. Construction work on that effort kicked off last week.

Regency announced that a “luxury fitness” company would become the first tenant in that space, and a source familiar with the matter told ARLnow that the building will soon become home to an Equinox gym.

That confirms a Washington Business Journal report from July 2017 that the health club was coming to the Market Common development, though it was initially unclear where it would be located. Equinox owns a majority stake in SoulCycle, and the companies often open locations near one another.

SoulCycle currently operates four locations in D.C., according to its website.