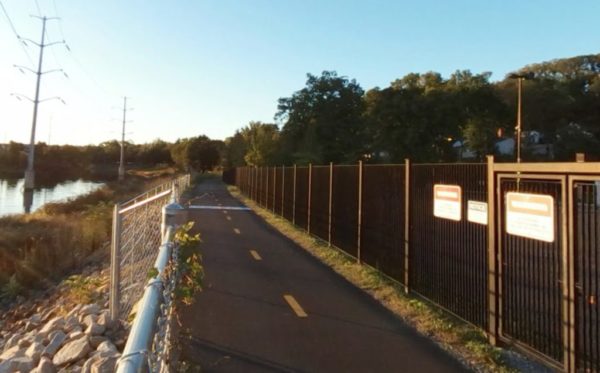 (Updated at 10:15 a.m.) Anyone planning on hitting the Four Mile Run bike trail should watch out for a detour near the county’s Water Pollution Control Plant these next few days.

The county announced a “limited, partial detour” on the trail starting today (Wednesday) as it runs past 3304 S. Glebe Road, in the Arlington Ridge neighborhood along the county’s border with Alexandria.

A tweet from the county’s Department of Environmental Services said the work should last for a “few weeks,” and that it stems from construction at the sewage plant. A subsequent tweet described the primary disruption for trail users to be “a 200-yard one-lane merge.”

The County Board approved a series of repairs at the plant in 2017, with work planned on some aging water tanks at the treatment facility.

Anyone biking or running on the trail should follow posted detours.

Update 1/30: A 200-yard one-lane merge is established on Four Mile Run trail near water plant Gate 12A (3330 S Glebe Rd). Look for signs and cones. Contractor may have to create temporary detour only for half a day next week. Stay tuned. @ARLnowDOTcom @JuddLumberjack

Read more →
More Stories
Just Reduced Properties in ArlingtonCounty Board Signs Off on New Ballston Childcare Center, Despite Local Opposition to the Project