All That Yazz, a relatively new, Rosslyn-based soap business has managed to capture the sights, sounds and, most of all, smells of workspaces in Arlington.

An offering of the small business is the “Executive Soap,” named for the contractors, consultants and government workers who make Arlington, Arlington.

“It smells like power. It smells like corporate power. Which is ironic because it is a homemade soap,” said Yasmine Bandali-Alvarado, owner of All That Yazz.

It captures that whiff of air in the wake of a coworker passing your desk to take care of something, she said.

But the one-woman, two-year-old operation has few things in common with the high-rise offices around it.

With microbusinesses come micro budgets. Plus, artists like her have challenges in running a business because they have to put a damper on their creative side in favor of thinking strategy, profit and the bottom line, she said. 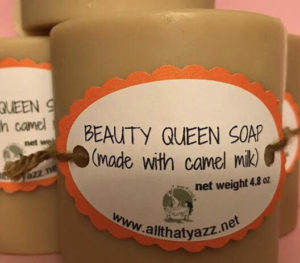 “It’s good to be creative, but then, how do you sell it; how do you advertise it; how do you know what people are looking for?” she said. “Without that business side, it’s just a piece of art.”

All that Yazz offers 18 soaps, most of which are vegan, but some are made with goat and even camel milk.

“It’s a very luxurious soap — the camel’s milk is a notch above the goat’s milk,” Bandali-Alvarado said.

All the soaps are environmentally friendly; they’re free of palm oil, which has come under fire from conservationists because its production can negatively impact local ecosystems, she said.

Farmers burn harvested palm trees to plant new ones, creating smoke and contributing to global warming, Bandali-Alvarado said. Wildlife living in palm tree plantations is driven out, sometimes into the hands of poachers. Bandali-Alvarado was raised in Kenya, giving her an especially deep appreciation of the issue. 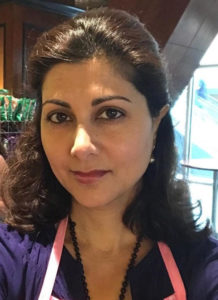 “This is really a big part of why I am so passionate about the soaps,” she said. “It’s a much deeper issue and it offers the consumer an alternative.”

Like many such businesses, All That Yazz relies on local festivals to reach customers. There are enough events in Arlington, but the organizers should focus more on the microbusiness vendors, she said.

“The majority of them are disorganized. To me, they just want the money (from the vendors),” said Willett, a Crystal City resident. “The person who is organizing it is late and it’s their cousin, their momma — the baby — running it.”

Even before they reach an event, there’s a problem, the women said. The owner has to first earn back the vendor fee and the cost of production before turning a profit, Bandali-Alvarado said.

Mary-Claire Burick, president of the Rosslyn Business Improvement District (BID) said a hallmark of the organization is its business engagement program, which connects businesses and helps with marketing even for small businesses like All That Yazz.

“Organizations like ours are critical, especially for small businesses,” Burick said. It offers some 200 events a year and access to its marketing channels.

“Networking is just key,” Bandali-Alvarado said. “You rely on referrals (because) usually the cost of advertising is too high.”