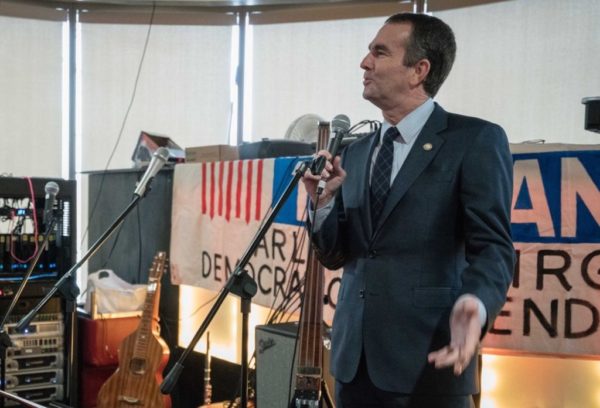 (Updated Tuesday at 9:50 a.m.) The head of Arlington’s Democratic Party is urging local activists to “keep the faith” in the wake of the cascade of scandals plaguing top leaders in Richmond.

While any one of the state’s top three elected Democrats could yet resign — Northam and Herring for admitting to wearing blackface as young people, Fairfax over allegations that he sexually assaulted two women — Caiazzo sought to remind party faithful that “the 2017 election was never about one or two individuals.”

She joined the growing calls for Fairfax to step down late last week, after a second woman accused him of rape, and has already demanded that Northam step aside. But, with all 140 state lawmakers and a variety of local offices on the ballot this fall, Caiazzo is urging her committee to work to “have an impact in our own community.”

Her full email to the committee is as follows:

We are all struggling to deal with the disturbing news from Richmond. I have sat down to pen this email to you multiple times over the past week, only to have my sentiments overtaken by the latest news cycle. I do not know how these controversies will end.

But as I said at our monthly meeting on Wednesday, I do know that Arlington Democrats have a role to play in moving our community forward through these difficult times. We may not be able to affect the outcomes of the dramas happening in Richmond, but we can have an impact in our own community. We can reject hate and support sexual assault survivors. We can channel our collective anger that issues of racism and sexual assault still plague us into finding positive solutions for the manifestations of these issues in our own community.

We also can remember that the 2017 election was never about one or two individuals. It was about a movement of grassroots activists of all backgrounds and ages rising up to provide a badly needed course correction for our country. The rise of progressive activism was the central victory of the 2017 election. No subsequent controversy, however hurtful, can take that victory away from us. Only we have the power to do that — only we can decide whether we will allow this heartbreak also to break our activist spirit.

TOO MUCH TO ACCOMPLISH TO GIVE UP
To that question, Arlington Democrats, I say NO. I will not allow the failings of individual leaders to dampen my activist spirit. I cannot — there is simply too much work to be done to achieve a fairer, safer and more prosperous Commonwealth. The stakes are too high. As in early 2017, I am once again picking myself up and dusting myself off. Two steps forward, one step back: it’s time for the heart of the Democratic Party — its local activists — to keep moving forward again.

In that spirit, and mindful that Democrats must re-earn the trust of voters and volunteers that has been lost over the past few days, I respectfully invite you to join me at several upcoming events, detailed below. Some are organized by Arlington Democrats; others are community events. Now more than ever, we need both: to lead in our own right, and to meet our neighbors where they are. I hope that you will join me in the struggle to lead our Party, our community, and our Commonwealth forward.

Caiazzo is referring both to previous listening sessions held by activists on both race and sexual assault, and to some upcoming community discussions on the county’s history with Nazism and school desegregation.

Arlington Del. Patrick Hope (D-47th District) made headlines this weekend for threatening to introduce articles of impeachment against Fairfax if he refused to resign, and circulated a potential resolution to start the process among his Democratic colleagues. But he backed off that threat this morning (Monday), writing in a statement that he is “open to discussions on other avenues” that would allow for a full investigation of the accusations against Fairfax.

My statement this morning – I remain committed to the victims first. pic.twitter.com/01xynHwOdj

Some reports have suggested that Hope faced resistance from within his own party for the move, particularly from members of the Legislative Black Caucus.

Hence the Hope climbdown this am…

A third Va Dem, this one briefed on the call said none of @HopeforVirginia's allies spoke up. Members of @VaBlackCaucus, which has been steering much of the reax among Va Dems since last Fri, spoke first and that was that.

"It was a pre-set massacre," says this Dem.

The lieutenant governor is still telling reporters that he does not plan to resign, and is currently looking for an FBI investigation into the claims against him — one incident is alleged to have happened in Boston in 2004, the other in North Carolina in 2000.

Northam also gave some of his first interviews since the scandal broke with the news that a racist photo appeared on his medical school yearbook, saying that he is “not going anywhere” and pledging a renewed focus to racial justice in the remainder of his term.

Herring has been silent, and criticism has been markedly more muted of his conduct, after he voluntarily admitted to wearing blackface once while in college, and apologized.

“I should additionally note that I have not called for the resignation of Attorney General Mark Herring, despite my strong disapproval of his conduct at age 19,” Del. Mark Levine (D-45th District) wrote in a Sunday email to constituents. “Herring’s voluntary admission of his blackface representation of a rapper, his lack of racist intent and his profound apology all seem sincere to me.”

However, Levine did note that he is one of just a few voices calling on Senate Majority Leader Tommy Norment (R-3rd District) to step down, after reports that he edited a college yearbook that was filled with photos of students in blackface and racial slurs. Norment has denied any knowledge of the photos.