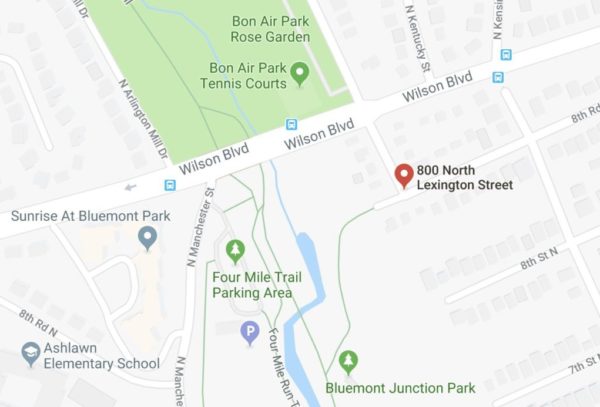 Arlington County Police are looking for the suspect in a robbery in the Bluemont neighborhood over the weekend.

The crime happened Saturday afternoon on the 800 block of N. Lexington Street, near Wilson Blvd and the W&OD Trail.

Police say a woman was sitting on a bench when a man approached her from behind, asked for directions, then exposed himself. The man then grabbed the woman’s personal belongings and ran off, according to police.

ROBBERY, 2019-02160157, 800 block of N. Lexington Street. At approximately 1:15 p.m. on February 16, police were dispatched to the report of a larceny and exposure. Upon arrival, it was determined that the female victim was sitting on a bench when the unknown suspect approached her from behind and asked for directions. As she turned, she observed the suspect exposing himself before he grabbed her personal belongings and fled the scene on foot. The suspect is described as a Hispanic male, 18 – 20 years of age, 5’2″ – 5’4″, 130 – 150 lbs with black hair and brown eyes. He was wearing a black hoodie, green shirt and burgundy shorts at the time of the incident. The investigation is ongoing.

The rest of this week’s Arlington County Police crime report is below.

BURGLARY (late), 2019-02140282, 1200 block of N. Garfield Street. At approximately 10:29 p.m. on February 14, police were dispatched to the report of a late burglary. Upon arrival, it was determined that a subject entered a residence and damaged property. The investigation is ongoing.

ASSAULT & BATTERY ON POLICE, 2019-02130108, 4100 block of Campbell Ave. At approximately 12:00 p.m. on February 13, police were dispatched to the report of a disorderly female subject refusing to leave a business. While being detained pending the completion of a banning notice, the suspect struck one of the responding officers with a closed fist. Senait Taye, 38, of Arlington, VA was arrested and charged with Assault and Batter on Law Enforcement and Failure to ID. She was held without bond.