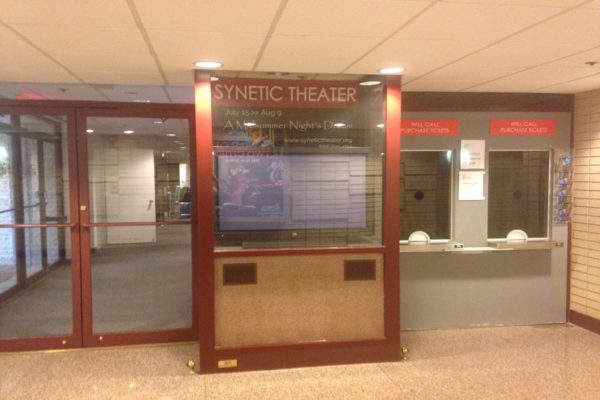 Synetic Theater will now be able to stay put at its current space in Crystal City, after its owners initially feared they’d need to find a new home.

The theater signed a lease extension for its space at 1800 S. Bell Street through “late 2022,” according to a press release from property owner JBG Smith.

The building is one of several in the neighborhood that will likely become home to Amazon’s new headquarters in Arlington, and JBG told the theater’s staff last summer that this season would be its last in the 12,000-square-foot underground space. The developer is planning a host of renovations to the building ahead of Amazon’s arrival, and could even redevelop it entirely once Amazon’s employees move to office space that the company plans to build in Pentagon City.

But it seems JBG and the theater were able to work out an arrangement for Synetic to stay put, at least temporarily. The theater has called the space home since 2010.

“Synetic Theater has been one of National Landing’s leading cultural organizations for nearly a decade, and this agreement ensures that the theater’s work will continue to enrich and inspire the community for years to come,” JBG Smith Executive Vice President Andrew VanHorn said in a statement.

Paata and Irina Tsikurishvili founded Synetic in 1996, but the S. Bell Street space was the theater’s first permanent home. It’s one of a dwindling number of performing arts space left in the county, and arts advocates had initially been quite concerned that the rising real estate prices driven by Amazon’s arrival would force Synetic to go elsewhere.

“We are excited for Synetic Theater’s role in the future of National Landing,” Paata Tsikurishvili said in a statement, using the moniker crafted for the Crystal City, Pentagon City and Potomac Yard area. “As we continue to captivate audiences from our long-time home at 1800 S. Bell Street, our hope is to be a source of enjoyment to both current residents and those who will be joining National Landing.”

The fate of other businesses in the underground Crystal City Shops is a bit unclear — previous reports have suggested that many have fled the development recently, and others have seen business stagnate.

But the entire area is set to see a host of changes in the coming months, from JBG’s new “Central District” redevelopment project to its efforts to transform an empty office building at 1900 Crystal Drive into new mixed-use space.