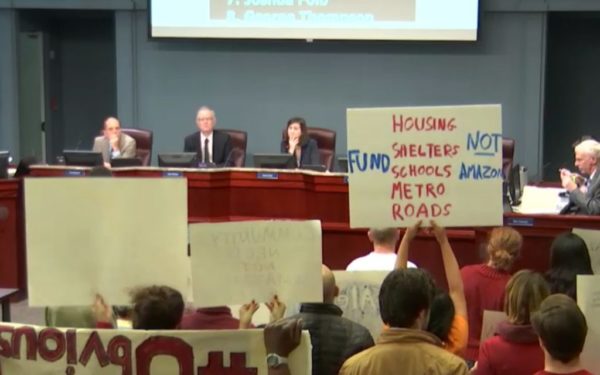 Though Amazon skeptics fret that Arlington officials will offer them only limited opportunities to have their say on the new headquarters, county leaders stress that the complexity of the tech giant’s plans for the area means there will be plenty of chances for the public to weigh in.

Critics of the county and state’s proposal to Amazon have centered on the secrecy of the “HQ2” negotiations in the days following the company’s big announcement, arguing that it may well be an uphill battle for lawmakers to change the structure of the deal after Gov. Ralph Northam’s staff already hammered out most of the details with Amazon. Though both the General Assembly and the Arlington County Board will hold votes on the proposed headquarters agreement, opponents of Amazon’s arrival argue those will mainly be for show, and won’t include a robust community debate about the company’s impact on the region.

In Arlington, at least, officials say that such fears are unfounded. While Board members have pledged to hold a series of virtual town halls addressing all manner of Amazon issues in the months leading up to their planned February vote on the deal, they add that there will be a bevy of future hearings and discussions to guide the development of the headquarters in the (admittedly likely) event it wins the Board’s approval.

But the tech company also bought several Pentagon City properties from JBG that it plans to develop itself: the site of the planned “PenPlace” development near the intersection of S. Fern Street and Army Navy Drive and the planned “Metropolitan Park” development at 1400 S. Eads Street.

Amazon’s decision to buy the Met Park properties, in particular, raised eyebrows, as they’re zoned to become home to an apartment complex rather than office space.

An Amazon question I would love to see answered: Why did Amazon buy the remaining Metropolitan Park sites from @jbgsmith when that area is planned for residential, not office? @ARLnowDOTcom @psullivan1

County Board member Erik Gutshall replied to that tweet, noting that Amazon will ask for a change to allow the office construction, promising a “FULL public process” as part of that discussion to let the community guide the development. Gutshall subsequently told ARLnow that he expects that the company will need to secure a site plan amendment for the change, a step that requires the County Board’s approval, with deliberations to come should the February vote go Amazon’s way.

In an interview on the Kojo Nnamdi Show on WAMU 88.5 Friday, Board Chair Katie Cristol pointed out that there will likely be similar discussions around PenPlace “as that ramp up continues” by the company in the coming years. While Amazon opponents might not be able to block the company’s arrival as part of such land use discussions, Cristol pointed out that it will be a chance for the county to extract concessions from the tech firm, like new green space for the area or contributions to the county’s affordable housing loan fund.

“What’s exciting to me is not only the potential to see these buildings go up, but to realize some of these community benefits that have been envisioned,” Cristol said.

At Saturday’s Board meeting, Vice Chair Christian Dorsey added that “with each individual land use decision, we’ll have more data to figure out what the impacts are” of Amazon’s projects on the community, therefore further guiding how the county presses for mitigating resources from the company.

Of course, anti-Amazon activists are skeptical of how the county might manage that process. Tim Dempsey, a member of the steering committee for the progressive group Our Revolution Arlington, urged the Board Saturday to “turn these deals into a community wealth-building opportunity that would ensure more inclusive and regenerative economic development.”

“The county can wield the land-use approval process to support a coalition of citizens in reaching a private community benefits agreement with corporations and developers,” Dempsey said. “This a chance to give the community a voice. Please be a partner to us: your friends, neighbors and constituents.”

Board members repeatedly stressed that they do their best on that front, but also noted that state officials have taken much of the process out of their hands. Cristol said she only found out that Amazon would be coming to Arlington about eight hours before the news went public, and the bulk of the negotiations over the preliminary deal were handled by Northam’s staff (though state lawmakers were read into some of the details).

“There really wasn’t a whole lot coming to the Board on this,” Gutshall said Saturday. “It really was driven by the state.”

County attorney Steve MacIsaac pointed out that the state has handled so much of the process, in fact, that the county doesn’t even have all of the documents connected to the Amazon proposal. It all adds up to Board members promising transparency in their own Amazon decision-making, but urging skeptics to pay attention to state-level machinations in Richmond just as closely.

“If you have an issue with it, there is a venue to take that up,” Dorsey said Saturday. “It’s not in this room.”