Last time, we looked at Hazy or New England-style IPAs, and how they’re attracting new drinkers, and why that might be the case.

This week, I wanted to drill down on one of the most important techniques used in making those beers: dry hopping. The science of brewing is starting to catch up with the effects techniques like dry hopping can have — some of which run counter to everything we thought we knew about how hops worked.

First, let’s knock out some basics. Like, really basic — I’m not a scientist. Not officially, anyway. Hops impart different characteristics in a beer depending on when they’re added and how much are added.

Hops are usually added to the wort — the sugary liquid made when you soak your grains in hot water — while boiling it. Hops added earlier contribute bitterness, as their alpha acids stay at temperature long enough to isomerize. The later in the boil hops are added the less bitterness they impart, and the more their unique flavor/aromatic qualities emerge.

Dry hopping is used colloquially to refer hops added once the wort is cooled, whether during primary, secondary or post fermentation (prior to packaging or in keg). The idea is to punch up the hop aroma and flavor notes, and because they aren’t boiling, you get all that flavor and aroma without making the beer more bitter. 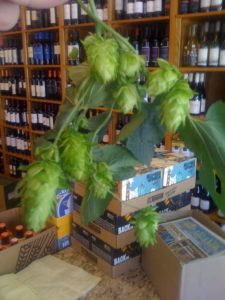 Dry hopping has been used in big IPAs to offset increasingly intense bittering additions, and as tastes changed, became the dominant — in some cases only — method by which hops were added, in the grand American tradition of “some is good; therefore, more is better.”

Scientific advancements over the past couple of years are refining our knowledge of dry hopping’s effects. A 2016 study found that dry hopping can, in fact, contribute bitterness to beer: Sapwood Cellars co-founder Scott Janish breaks down the study well on his blog, but the TL;DR version is that there are specific oxidized alpha acids in hops called humulinones.

These humulinones are much more soluble in beer than the major alpha acids, but, being about 66% as bitter, can contribute a “smoother” bitterness than that of isomerized alpha acids.

In a later post, Janish digs into findings that reveal how beers rated under 20 IBU (International Bittering Units) can become more bitter through dry hopping, while those over 30 IBU can become less bitter. The wildest finding to me is that because dry hopping increases a beer’s pH, it can boost the perceived bitterness of the beer even if it doesn’t increase its IBU.

That brings me to a piece I read over the weekend recounting the keynote address from the recent Ohio Craft Brewer’s conference by Tom Shellhammer, Norwester Professor of Fermentation Science at Oregon State University. Shellhammer reiterated findings of those earlier studies, but added analysis of a phenomenon known as “hop creep.”

Hop creep is when dry hopping triggers additional fermentation in a beer. That can happen because enzymes in the hops “can break down the unfermentable long-chain sugars to simple sugars”, which can trigger fermentation if any yeasts remain present and active in the beer.

So, wondering how a “zero IBU” NEIPA still has some bitterness to it? Wondering why that Hazy IPA you like can be inconsistent, a little stronger some times than others? Look to the science, friends. We still have much to learn.