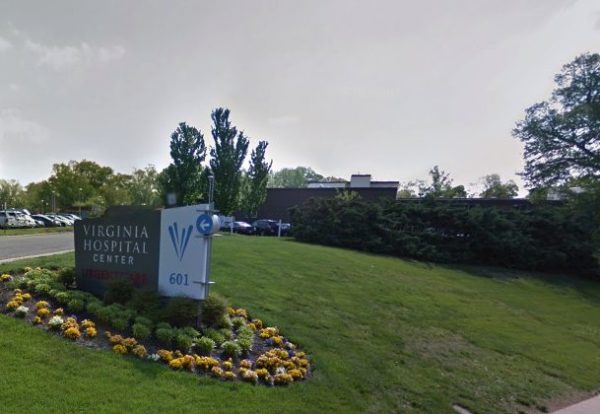 Virginia Hospital Center executives celebrated when they finally earned permission to expand the hospital’s North Arlington campus and execute a long-planned land swap with the county — but one of the consequences of the deal has some employees and parents feeling blindsided.

VHC is gearing up to send Arlington its property at 601 S. Carlin Springs Road in Glencarlyn, in exchange for gaining control over a piece of land at 1800 N. Edison Street. The latter property is adjacent to its existing facilities along N. George Mason Drive, and will be a key part of the hospital’s hotly debated expansion plans.

Of course, that’s going to prompt some big changes at the Carlin Springs Road site as the county takes over. Among them is the impending closure of a childcare center that the hospital operated on the property in tandem with Bright Horizons, serving VHC employees and local parents alike.

The daycare facility is now set to close on July 26, according to letters from both VHC and Bright Horizons provided to ARLnow. Though that deadline may be a full four months away, parents with kids at the daycare say they’re now scrambling to find alternative options.

The county is currently facing a childcare crunch, with local leaders currently weighing strategies to bring down the cost of daycare options in Arlington, and VHC parents say those conditions have only exacerbated the shock they felt about the childcare center’s closing.

“I was feeling reassured that finally Arlington realized that there’s more demand than supply when it comes to childcare, and now this happens,” said one parent, who declined to be identified. “It’s ironic that in Arlington, where there’s supposed to be some attention to how challenging it is to find childcare centers, instead of opening a new place we’re closing one of the big ones down and forcing families and employees to figure things out on their own.”

A spokesperson for the hospital would only confirm that the center is closing sometime this year, saying that “the details of the closing are still being worked out,” but otherwise would not comment on the situation.

Mike Malone, VHC’s vice president for administrative services and chief human resources officer, wrote in a letter to parents that it was his “great disappointment” to have to close the center. He said “the county will be repurposing the land on the Carlin Springs campus and demolishing the building,” prompting the closure — VHC leaders previously told ARLnow that the land swap would be finalized by May or June at the latest.

Malone added that Bright Horizons is “committed to helping every current family find care in another Bright Horizons center or [helping] you transition into another center of your choosing.”

In a letter of their own, Bright Horizons executives pointed to the “over two dozen centers spread across the metro area” that the company operates as options for parents. They also noted that they have “resources available to facilitate your child’s transition,” and said they plan to help staff at the center find jobs at other Bright Horizons locations.

Parents at the center told ARLnow that help is appreciated, but they fear it isn’t enough to manage the transition.

Several say that the hospital and Bright Horizons told them that the land swap would likely affect the center somehow, but that any decision about its future wouldn’t be made for a year or two yet. Others had never even heard about the land swap in the first place.

“Neither the staff nor the parents knew it was going to close permanently and we certainly had no warning that the notification for it to close was happening in March,” said one parent, who declined to be identified over fears of reprisal as they work with Bright Horizons to find a new daycare for their child. “Now the parents are panicking and don’t know whether or not they will have daycare.”

In the worst-case scenario, however, parents say they heard that the facility wouldn’t close until the end of this year.

Not only would that give them more time to search for options, but it would also give Bright Horizons time to open up a new childcare center in Ballston — the County Board signed off on the project earlier this year, and it’s set to open in January 2020.

“Wouldn’t it have made some sense to delay this until that Ballston center opened, and fill that first with anyone that wants to go there from [the VHC center]?” one parent asked.

Now, parents say this planned summer closure puts them in a tough spot, as many other programs don’t start offering classes until August or September.

“They’re giving us less than six months notice, which is ridiculous,” said another parent, who also declined to use their name.

Parents fear that other daycares, run by Bright Horizons or otherwise, will be more expensive than the VHC option, or too far away to be convenient. One parent points out the VHC facility is unique in the county for the way it “accommodates hospital employees with extended hours and [offers] guaranteed care even on snow days.”

Another says they took several days off work, just to spend time calling up other daycare providers.

“I’m on so many waitlists now, but who knows whether I’ll make it,” they said. “I can’t believe I’m having to go through this process again. I thought I was done.”

Perhaps most of all, parents at the center are frustrated by the lack of transparency from VHC. They can understand the motivation for not being fully forthcoming with all these details — parents might’ve fled the daycare early if they knew it was closing imminently — but they remain exasperated all the same.

And considering that the hospital pledged to mend some fences in the community following the contentious process of securing the expansion’s approval, parents are puzzled that VHC officials haven’t sought to be more helpful.

“Nobody has been forthcoming about this, and that’s especially disturbing given the tight childcare and pre-K availability in Arlington,” one parent said. “The hospital’s approach was completely inappropriate. If they’re trying to build relationships with community, this is not way to do it.”