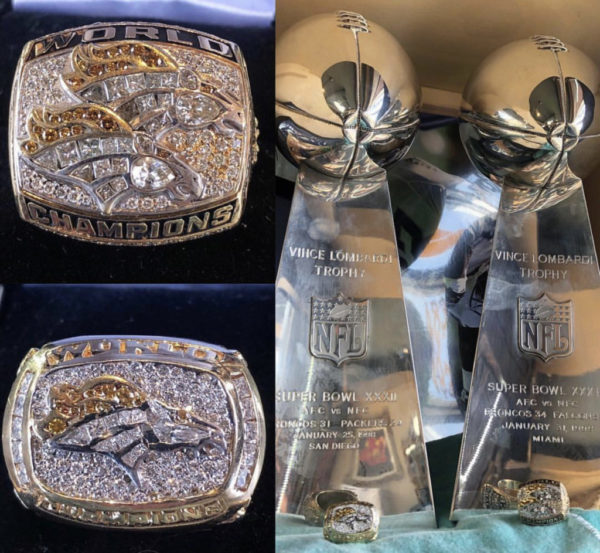 A pawn shop in Crystal City has not one but two of the most rare items around: Lombardi trophies. And that’s not to mention the Super Bowl rings.

Eric Rizer, the owner of Royal Pawn at 507 23rd Street S., says a former Denver Broncos player — he wouldn’t say who — has parted with the two Super Bowl rings and trophies, which date back to the team’s championship 1997 and 1998 seasons.

The trophies are replicas, made by Tiffany & Co. and about 75 percent of the size of the real trophy, of which only one is made for each Super Bowl-winning team. Starting players are eligible to buy the replicas after winning the big game, Rizer said, adding that he has verified the authenticity of each with Tiffany via an engraved serial number.

While the sterling silver trophies are more rare than the Super Bowl rings, the rings come with a higher price tag thanks to what they’re made of: 14-karat gold and a combination of white and canary yellow diamonds.

The trophies are on sale for $10,000 each, while the single-horse ring is $25,000 and the double-horse ring is $30,000, Rizer said. He said interest in the NFL’s highest prizes has been high, with kids frequently stopping by to gawk at the trophies and rings, which the store allows.

Rizer says he even brought one of the trophies to the nearby Crystal City Sports Pub for its Super Bowl viewing last month, attracting lots of attention.

While Rizer would not reveal the name of the seller, he did say that it was a Pro Bowl-caliber player who — despite playing for the Broncos — currently lives in the D.C. area.

Royal Pawn opened in Crystal City in 2017 and has other locations in Vienna and Alexandria. Rizer said he had been “dying to open” along 23rd Street S. in Crystal City and is now doubly excited about the location, given the arrival of Amazon’s new office campus, which is currently under construction.

You are seeing that correctly, folks. This is one of the most rare sets available ANYWHERE! Pictured are Denver Broncos Super Bowl Players Rings AND Trophies from both the 1998 and 1999 Super Bowls! These pieces are guaranteed 100% Authentic and are from a starting player who was also retired in Denver’s Ring of Honor! The Trophies are solid silver and made by Tiffany & Co. Only starting player and coaches are eligible to receive a copy of the Lombardy. Give us a call today for more information, or stop on in and give them a look! (571)483-0041 #RoyalPawn #ArlingtonVA #DenverBroncos #SuperBowl #LuxuryJewelry #Tiffany #TiffanyandCompany #SportsJunkie #Collector #Denver #Colorado #SuperBowlRing #NFL #NFLnetwork #ForSale #Gold #Diamonds #JewelryAddict #MensJewelry #Championship #ChampionshipRings