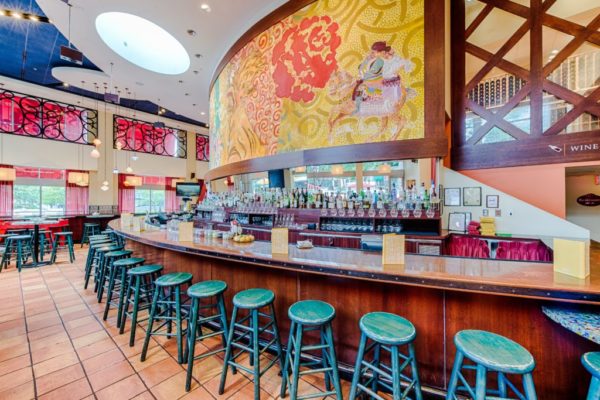 One Arlington restaurant worker has a shot to win big at this year’s local “Oscars for the restaurant industry.”

Maria Contreras works as a food runner at José Andrés’ Jaleo at 2250 Crystal Drive in Crystal City and told ARLnow she’s worked her way up in the industry from where she started as a janitor almost 20 years ago.

The award is part of 37th annual RAMMYs, a creation of the Restaurant Association Metropolitan Washington to celebrate D.C. area restaurants and their workers. Only restaurants that are members of the organization are eligible for nomination. Other award categories include best manager, best pastry chef, and best new restaurant of the year.

Contreras’ manager at Jaleo, Nick Porter, described Contreras as “a rock of a food runner” who trains all the front staff at the restaurant and manages communications with the back.

“There is always one constant person in every restaurant who, if they were gone, the effects would be felt across the board, and ours is Maria,” said Porter. He added that Jaleo was “the most family oriented operation” he had ever worked for, with many employees staying years, including Contreras.

“She has been here from the get go, 14 years, and is looked at as the matriarch of the staff,” he said. “It is like celebrating that teacher that has given nothing but the best for so long and has never lost her luster.”

An anonymous panel of judges will decide who wins Employee of the Year, as well as most of the other categories. But the public picks the winners for best restaurant for Fast Bites, Gathering Place, Casual Brunch, and Upscale Brunch.

Typically, D.C. restaurants dominate the RAMMYs while Arlington restaurants get only a handful of nominations — and only the occasional award.

“Arlington has a great up-and-coming culinary scene with an amazing range of cuisines,” said Porter, when asked what winning the award would mean for the area. “Bringing a RAMMY nomination and win would help to solidify that Virginia and the the outlying areas have exceptional cuisine and some of the best people in the industry.”

Andrés, whose volunteer efforts and immigration advocacy earned him an Oscars cameo last month, could not be reached for comment.

People can cast their votes here until April 30 and the winners will be announced at the event’s annual black-tie gala June 30. Tickets to the gala are on sale here for $325.

ARLnow held a Q&A with Contreras about her work and what winning Employee of the Year this June would mean to her.

Contreras: I have worked in the restaurant industry for 17 years, since 2002. I first joined Oyamel as a janitor and busser in 2004, and then I joined Jaleo in 2006. So I have worked at Jaleo for 13 years.

Why did you originally get into the restaurant industry?

What motivations continue to drive you to work so hard in the industry today?

I love my job, and I love what I do. If you love what you do – you are happy. I enjoy meeting different people. I’m also a single mother, and my daughter says that I inspire her to be successful, so that is what motivates me.

What do you wish more people knew about what it’s like to work in your industry?

I would like people to know that it’s an enjoyable and positive experience.

What would winning a RAMMY for Employee of the Year mean to you?

Winning this award would be the best reward for all the effort I put forth every day. It would really drive me and motivate me even more.

How would you celebrate if you won the award?

If I won this award, I would love to go on a real vacation. Maybe to a beach somewhere with my daughter.