(Updated 17/04/18) Arlington County officials are calling for action on health disparities among residents in two new reports released this week.

Officials outlined a plan for an “oversight entity to provide governance” on health equity policies as part of a report released yesterday (Thursday). The 27-page document includes the plan in a bid to reduce a 10-year life expectancy gap that exists based on where in Arlington you live, as first reported in 2016 by the Northern Virginia Health Foundation.

The “Destination 2027 Steering Committee” was formed last year to close that gap, stating that, “the presence of health inequities in Arlington is inconsistent with who we are and what we value as a community.” The committee is made up of 40 local organizations including the Virginia Hospital Center, police and first responders, and most county departments. 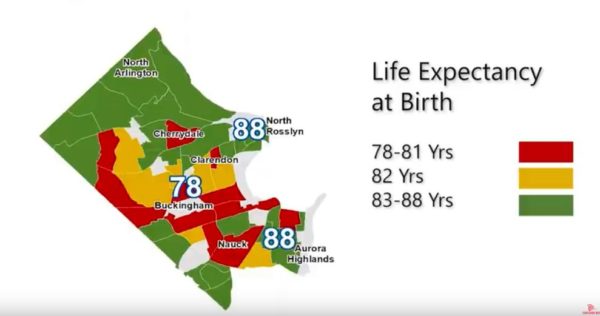 Details for how the group plans to achieve that are starting to come to light, including an open data project around health in the county.

“We are working to share a dashboard with data about health outcomes and community conditions,” Kurt Larrick, Assistant Director of the Department of Human Services, told ARLnow. “So stay tuned with that.”

“The public policies that have led to how our neighborhoods operate, how schools operate, how transportation occurs, often have some population’s benefit and others that are burdened,” said Reuben Varghese, the county’s Public Health Director, in a video yesterday. “And so that can lead to these groups having different life expectancy or other health outcomes.”

Yesterday the county also released the 2019 Arlington Partnership for Children, Youth and Families (APCYF) Community Report which noted “striking disparities” in kid’s health that were “based on factors such as income, race and ethnicity, sexual orientation, gender identity, and level of English proficiency.”

Some of the report’s findings include:

The 56-page report compiled data from local, state, and federal sources, including the new APS “Your Voice Matters” survey and the 2017 Youth Risk Behavior Survey.

“Nothing in particular was surprising, we noticed that the data confirmed many assumptions that we have heard,” Kimberly Durand, the coordinator for the partnership, told ARLnow.

“For example, Child Care and Mental Health continue to be of concern, and the data that we have compiled confirmed that,” she said.

“While we may not be responsible for creating these conditions, each of us owns solving them,” said Destination 2027 co-chair Tricia Rodgers.