A Twitter thread caught my attention recently from Raven Book Store, an independent retailer in Kansas.

The story is familiar to anyone in retail, especially in the age of Amazon and other online outlets. Beer and wine haven’t really had to deal with e-commerce as a threat to smaller brick-and-mortar shops — not yet, anyway. The conversation has centered on “big boxes vs. little guys” instead. Now, though, it appears that big-time online beer and wine retail is just over the horizon.

Washington Business Journal reported earlier this month that Amazon is looking to hire a Manager of Public Policy focusing on alcohol, fueling speculation it’s looking to take another run at becoming as potent a force in the booze business as it has been everywhere else.

Amazon isn’t the only giant sniffing around online retail: ZX Ventures, the growth/investment wing of AB InBev (Budweiser) is already working with larger retailers like Walmart and Kroeger, along with delivery services like Drizly. Bryan Roth offers a good, comprehensive deep-dive here.

Giant corporations see something they want, and they usually get their way. So what does this mean for independents? For the foreseeable future, I wouldn’t expect the price difference to be as dramatic as in books or other items: with sales taxes and delivery fees, online retail prices will hang near an independents’ for now.

Imagine, though, if one of these services really takes off — say, after regulations are rewritten or struck altogether. Amazon might start moving enough of a local favorite at $11, versus $11.99 at an independent, that the distributor gives them a discount to buy per pallet, knocking off $3-4 per case. Then you’re looking at $8.99 online versus $11.99 at an independent that can’t buy by the pallet and can’t match that price.

That’s the realities of the market, you say, and you’d be right. This is the reality we’ve lived with, as big chains and boxes build an interest in “craft” beer. What I keep circling around is an Amazon-type taking it one step further: working with breweries directly.

Ever see your favorite go-to beer pop up at Costco at a price that shocked you? Just wait: if the big guys get their way, this is the game-changer. This is the move that drops the big guys’ cost dramatically enough to see book-like price discrepancies. 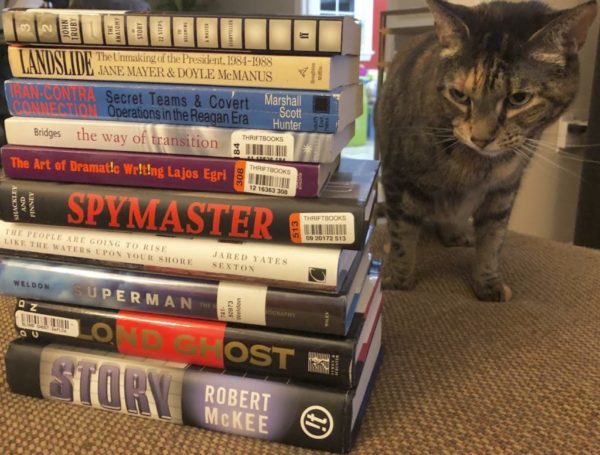 Back to books, actually: I support local bookstores as much as I can. I secretly harbor a daydream of opening one, if I’m honest. But if you’ve given me an Amazon gift card over the past few years, I’ve used it to find books on my wish list, used, as cheaply as possible. I do this because it’s fun, it’s convenient, and because I’m a massive hypocrite.

While those purchases usually end up being made through indie bookstores, after Amazon takes its cut who knows how much I’m actually supporting them? Still I do it: pictured are just some of the books I’ve picked up via this method over the past year.

What do my shelves look like when all of our favorites start popping up online for less than I pay wholesale? What will make sense for me to carry? As our success leans more heavily on the experience, and the service we offer, which breweries will rise to occasion to support small retailers?

Will beer go the way of books, shoes, and widgets of all types? If you’re in the business and not thinking about this stuff now, you need to start. Bezos is coming.