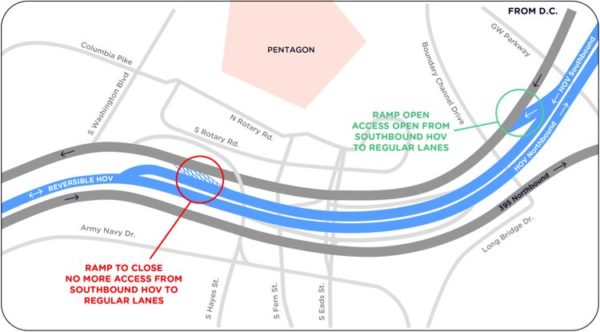 VDOT is permanently closing a ramp that allowed drivers heading southbound in the HOV lanes of I-395 to merge into the main southbound lanes near the Pentagon.

The closure, which is expected to happen later this week, will mean that drivers who take the southbound HOV lanes of the 14th Street Bridge from D.C., but who want to get into to the main lanes in Arlington, will need to take the earlier exit, closer to the bridge.

The closure is part of the 395 Express Lanes project.

The slip-ramp connecting the HOV lanes to the regular (or general purpose) lanes on I-395 South near the Pentagon will close permanently starting on or about June 1, according to the Virginia Department of Transportation.

Drivers wanting to access the southbound general purpose lanes from the southbound HOV lanes on this stretch of I-395 will need to use the slip-ramp located north of the Pentagon, near Boundary Channel Drive after crossing the 14th Street Bridge from D.C. into Virginia. Motorists traveling to the Pentagon or Crystal City — or non-HOV drivers who missed the exit near Boundary Channel — must take the exit at Eads Street. Drivers heading to the I-395 general purpose lanes should then follow signs to Army/Navy Drive and Hayes Street.

Getting to I-395 South from the Pentagon:

To help plan, drivers can find maps, videos and other educational information at www.expresslanes.com/projects/395.

This planned ramp closure is part of the new I-395 Express Lanes configuration, which will provide eight miles of faster, safer and seamless travel from the I-95 Express Lanes north to the D.C. line, as well as direct connections to the Pentagon and Crystal City. The new express lanes are scheduled to open in late October 2019. Information on how Express Lanes work and how to get an E-ZPass can be found at www.ExpressLanes.com.

The 395 Express Lanes are a public-private partnership between VDOT and Transurban. See more details on the project and related lane closures.