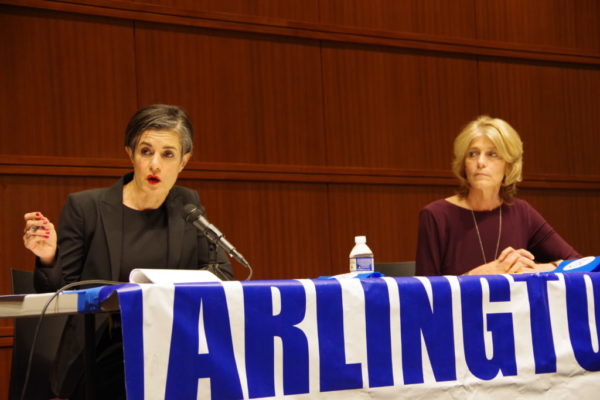 (Updated at 4:05 p.m.) Campaign ads for the commonwealth attorney’s race show differences in how the two candidates are spending money and aiming to win the upcoming primary election.

Incumbent Theo Stamos and challenger Parisa Dehghani-Tafti have spent differently when it comes to online advertising. Their campaigns have reached different populations as part of the hotly contested race for the county’s prosecutor office that’s been split by endorsements and support from lawyers.

Tafti spent $27,837 on six videos ads touting her recent endorsement by the Washington Post and attacking Stamos on Facebook and Instagram, including $20,414 spent by a political action committee funded by billionaire philanthropist George Soros. That number exceeds Stamo’s $9,745 in total spending this year on Facebook ads, including four video ads and several flyer-style ads touting her record in helping to lower the jail population and establishing a drug court diversion program, according to Facebook’s ad library.

“We’re running a local campaign without the assistance of any national group that might be relying on these types of metrics,” Stamos said of her lower spending, in an apparent reference to Tafti’s support from the Justice & Public Safety PAC.

“I’m hopeful that what is driving that interest is a desire to learn more about this campaign, what this office is about and why I’m the right person for the job,” Stamos added.

The ad with the highest overall impressions was one of Tafti’s. The ad criticizes the incumbent, claiming she charged children with a felony for putting soap in a teacher’s water in 1991 and that she opposed then-Gov. Terry McAuliffe’s approach to restoring voting rights to felons in 2016. This ad cost Tafti’s campaign between $1,000 and $5,000 to run, and has generated between 50,000 and 100,000 total impressions so far.

Other recent negative ads placed by the Justice & Public Safety PAC and authorized by Tafti have linked Stamos to national political issues, from abortion rights to voting rights.

Another difference between the candidates’ advertisements is not just how many people they reached, but who they reached.

Data from Facebook’s ad library indicates that viewers of Tafti’s campaign ads have overwhelmingly been women. Stamos, on the other hand, had several ads where the majority of viewers were male. A third of those viewing her digital flyer announcing Sheriff Beth Arthur’s endorsement were men ages 25-34.

The incumbent said her campaign did not specifically target men, and told ARLnow today (Friday) that her record in office and greater experience were the focus of her campaign — statements she’s repeated throughout the campaign:

Our message is for our entire community. We want everyone in Arlington and Falls Church to know what I’m about and what this campaign is about… I’m running for re-election on a record of progressive reforms and innovations that reflect our community’s values. My campaign also presents a stark contrast between an experienced prosecutor who has led an office with compassion for victims and defendants alike and concern for the safety of our community with someone who has never tried a case in a Virginia courtroom, or anywhere else as far as I can tell.

Tafti’s one ad that showed a majority male viewership in any age category was actually paid for by supporter and School Board member Nancy Van Doren. Van Doren’s ad urged voters to support Tafti to “help me ensure our kids receive effective interventions for minor offenses instead of harsh criminal prosecution,” and the largest group of viewers were men between the ages of 25 and 34.

The last difference comes down to geographic area. All of Stamos’ ads only ran in Virginia while several of Tafti’s generated nationwide viewership, with Texas-based viewers making up as much as 6 percent of viewers for some ads.

Tafti’s campaign did not immediately respond to questions about its nationwide reach, or its canvassing work offline.

Stamos said that she’s “personally been knocking on doors throughout Falls Church and Arlington since the first Saturday in January” and together with volunteers have knocked on “thousands of doors” in the community.

“This is without question the most direct and honest way to inform voters of my record, my positions and to answer any questions that they might have,” she said.

Stamos added that she didn’t know the exact number of campaign mailers and yard signs her campaign had posted around town, but she had recently added more yard signs due to the demand.

Previously, the challenger faced criticism from several public safety groups after they claimed one of her campaign mailers falsely labeled a fatal police shooting, which authorities said was justified, as an incident of “police brutality” that Stamos declined to prosecute.

Voters will decide which candidate will advance to the November general election by taking to the polls between 6 a.m. to 7 p.m on Tuesday, June 11. Residents can find their polling location here.

So far, the candidates face no challenges from other political parties, meaning the June primary could decide the general election.