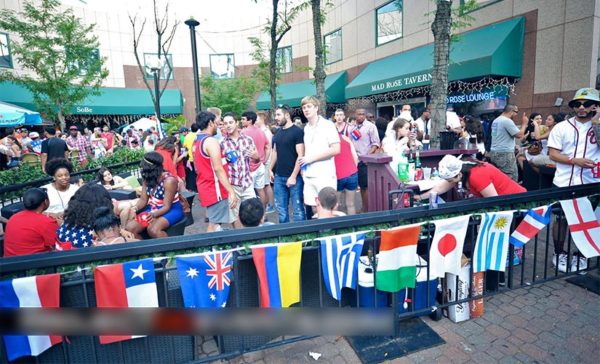 (Updated at 9:20 a.m.) It’s been more than a year since the last large, organized bar crawl in Arlington, and the former seasonal staple of the Orange Line corridor shows no sign of returning soon.

The last notable crawl to fill bars in the Clarendon area was the March 2018 Shamrock Crawl. The St. Patrick’s Day-themed pub crawl was one of three — including the Halloween Crawl and a Fourth of July-themed All American Bar Crawl — to bring thousands of revelers to the watering holes along Wilson and Clarendon boulevards.

Though many local residents were not big fans of the bar crawls, which sometimes led to participants vomiting in front yards or running naked down the street, the events did generate local buzz and were reliable draws for Courthouse and Clarendon-area bars.

The free-wheeling nature of the bar crawls was curtailed a bit when the Arlington County Board approved new regulations targeted the events in 2014. While the crawls continued for more than 3 years after that, Scott Parker, a partner in some of the bars that participated in the events, tells ARLnow that the costs imposed by the regulations likely led to them petering out.

“My sense is that the regulations and costs made it impossible for it to be as profitable in Arlington as it is in D.C. for the operators,” Parker said. “I think the demand was still there, but the regulations made it too hard for them to turn a profit.”

“Kind of hurts because Arlington bars already have a competitive disadvantage to D.C. bars since we have to close an hour earlier, and must live by many other restrictions that they don’t have to in D.C.,” Parker added.

Project DC Events, the primary organizer of the big Arlington bar crawls, is still holding similar crawls in D.C. and Baltimore — even using video from Clarendon to promote its upcoming All American Bar Crawl in the District. The company did not respond to requests for comment.

Arlington County spokeswoman Susan Kalish says the county has chalked up the lack of bar crawls to declining popularity and is not reconsidering any of its policies, which call for event organizers to cover the cost of an added police presence and trash pickup.

“Arlington County supports more than 250 special events a year,” Kalish told ARLnow. “We have seen a decline in pub crawls, however there is always an ebb and flow in what’s popular.”

“Last year, we did have a pub crawl organizer complain about the cost for holding their event,” she noted, adding that “this does not appear to be a systemic complaint regarding our special events and there are no plans at the time to reconsider the policy.”

“Public safety remains our top priority during all special events and resources are deployed to ensure the safety of participants, neighborhood residents and businesses,” Kalish said.