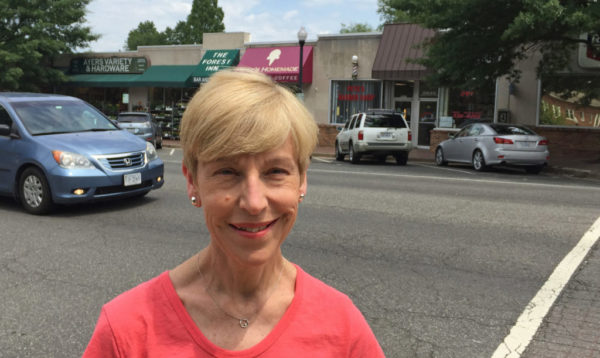 (Updated at 9 a.m.) Several years ago, my then 13-year-old son announced that he had been hit by a car on Washington Blvd. in Westover. He quickly added that he wasn’t hurt; a car had lightly tapped him when he was riding his bike. That memory came back to me when I heard that Arlington County is collaborating with the Virginia Department of Transportation (VDOT) on repaving a portion of Washington Blvd in the Westover neighborhood near where I live.

A lot has happened in the years since my son’s incident. New retail establishments have made Westover a magnet for more visitors, and there are more walkers, drivers and cyclists on Washington Blvd. Reed Elementary School will undoubtedly add to the congestion when it opens in 2021.

All of these factors raise the likelihood of accidents involving pedestrians, cars and bicycles. Last fall, a woman was struck by a car while she was in a crosswalk, resulting in serious injuries. That accident spurred many calls for improvements on this busy street.

While Arlington County takes safety concerns seriously, staff also know that Arlington residents want to be involved in decisions affecting their neighborhoods before they are set in stone (or in this case, asphalt). The challenge is how much and what kind of public engagement, for which kinds of projects, will be most effective. County staff say they are trying to be clearer about expectations for community involvement.

The Westover repaving project is one example of how county staff are trying to engage the community more effectively. When staff learned that Washington Blvd was going to be repaved between N. McKinley Road and N. Frederick Street, they saw an opportunity to improve lane striping, replace crosswalks and add bike lanes. A routine repaving project might generally involve communicating with the community. However, the Department of Environmental Services (DES) staff determined that this project required a higher level of involvement, due to multiple uses of Westover Shopping Center and the project’s potential to change the character of the road.

Community members had feedback opportunities at two open houses at the Westover Library, a “pop-up” at the Westover farmers market, and via an online survey (which garnered 900 responses). Not surprisingly, the main concern was for greater safety, including better visibility of pedestrian crossings.

Three different proposals included such elements as high-visibility crosswalks, bike lanes on one or both sides of the street, back-in parking and reducing the number of parking spaces. From the final plan submitted to VDOT, it’s clear that community feedback had an impact. For example, the back-in parking concept was not favored by a majority of the community, so it was eliminated. It was also decided to include a bike lane only on the eastbound side of the street.

Lifelong Arlingtonian Hannah Weiss dropped in to one open house. A cyclist, Weiss said, “I was impressed by the quality of the maps they showed and that county staff were on hand to answer questions.”

While I applaud the effort to engage as many people as possible, I also wondered if anyone is being left out. Erin Potter, county public engagement specialist, told me the community engagement plan for Westover “included school and PTA representatives, as well as multi-family building managers and individuals from faith communities. I also took an afternoon to flyer the neighborhood and connect with local businesses owners and patrons.”

That effort was appreciated by Westover business owners such as Kristy Peterkin, manager of Ayers Variety & Hardware, who thinks the county is doing more to keep them in the loop. “Our biggest concern was the proposal to have back-in parking. It would have significantly limited who would be able to park in front, especially senior citizens who are a big part of our clientele. It also would have eliminated five spots, and we can’t afford to lose any parking in Westover.”

Peterkin was impressed with how well the county listened to the respondents, adding, “I think it’s the first time they really heard what the Westover shoppers and business owners said.”

I look forward to seeing how the community engagement model informs more complicated projects and to seeing how a progressive community listens to diverse voices, not just the loudest or most connected, to improve the safety and quality of life for all its residents.

Cheryl Moore has lived in Arlington for 35 years. She has been a volunteer for Arlington Public Schools, her church, civic association, the Arlington Community Chorus, and many nonprofit organizations serving the Northern Virginia community.