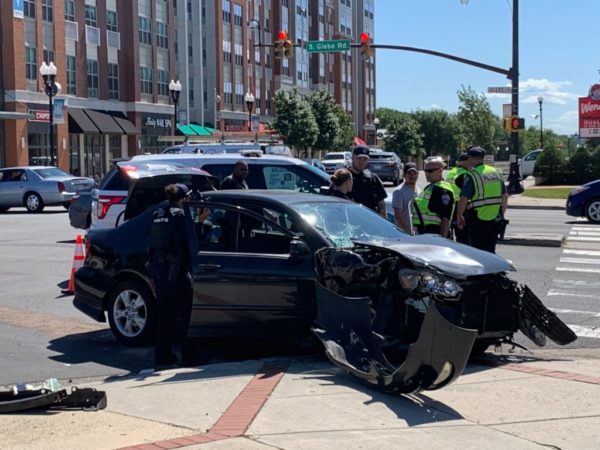 (Updated at 1:20 p.m.) Arlington County Police will close the busy intersection of S. Glebe Road and Columbia Pike for two hours over the weekend as part of a crash investigation.

The closure is scheduled from about 6-8 a.m. Saturday, ACPD said in a statement today. Detectives will be conducting “follow-up investigation pertaining to a critical multiple vehicle crash,” which happened last Friday afternoon.

One person was seriously injured and trapped in their vehicle as a result of the crash, according to scanner traffic at the time.

“One victim was transported to an area hospital with critical, but non-life threatening injuries,” said ACPD spokeswoman Kirby Clark. “No other significant injuries were reported.”

The Arlington County Police Department’s Critical Accident Team will close the intersection of South Glebe Road and Columbia Pike on Saturday, June 22 in order to conduct a follow-up investigation pertaining to a critical multiple vehicle crash that occurred at approximately 3:14 p.m. on June 14.

The following road closures will be conducted in order to restrict access to the intersection from 6:00 a.m. until approximately 8:00 a.m.:

Access to businesses within the area will not be impacted, but vehicular traffic and pedestrian traffic in some areas will be restricted.

The investigation into the circumstances of this crash remain ongoing and anyone with additional information related to this incident is asked to contact Detective B. Ames at [email protected] or 703-228-7073. To report information anonymously, contact the Arlington County Crime Solvers at 866.411.TIPS (8477).

⚠️ TRAFFIC ALERT ⚠️ ACPD will close the intersection of S. Glebe Road and Columbia Pike from approx. 6-8 a.m. on Sat., June 22 to conduct a follow-up investigation regarding a critical crash that occurred on June 14
Details: https://t.co/9CnzomYNwa pic.twitter.com/7P8zEMstbH