This week I came across a tweet from Meridian Pint’s Jace Gonnerman about a Kolsch he’d just tapped at the Brookland Pint location in D.C., unaware that lactose was in it.

I figured it was a sign to get around to the subject of lactose — What beers it’s in, if it’s noted on the label and if not, why not? Also, why use it? While there is a “traditional” use of lactose in beer — though even that’s arguable; we’ll get to that in a moment — it usually comes up now relative to Milkshake IPAs, Pastry Stouts and Dessert Sours.

Let’s learn a little about the usage of lactose in beers then and now.

The commonly accepted origin of lactose in beer traces back to the early 20th century, with the advent of Milk Stout. Like many of the styles we know today, Milk Stout was largely a marketing-driven creation.

A quick aside: if the theme of my beer writing through the end of my first stint at Arrowine was “Beer is History,” the theme of this run is “Beer is Marketing.”

In the late 1800s, Stouts grew weaker in strength and came to be recommended as restorative, nourishing drinks — the kombucha/wheatgrass juice/Master Cleanse of its time. Very Goop. Mackeson’s patented the Milk Stout in 1907, with the idea that lactose = milk = health = even healthier Stout! Science! 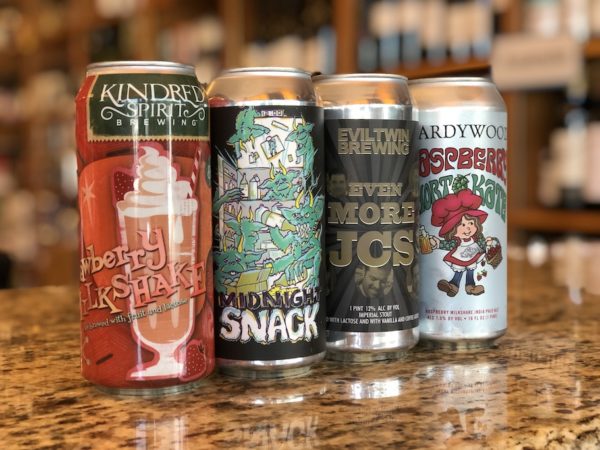 These days, you’ll find lactose not only Stouts but IPAs, Goses, Berlinerweisse and apparently even the odd Kolsch. An unfermentable sugar, lactose can add richness to a beer and take the edge off of harsher, more intense flavors while retaining the brewer’s target ABV. Lactose also has less perceptible sweetness than sucrose, so it can do all that and help keep the final beer from being cloying.

The biggest issue surrounding lactose in beer of course comes from the fact that many people are lactose intolerant. Omnipollo’s Henok Fentie, who along with the folks at Tired Hands can be credited with/blamed for the Milkshake IPA (depending on your point of view), is lactose intolerant himself but claims he can have a couple without incident.

But his experience isn’t everyone’s, which is why clear labelling is becoming more important to more consumers.

Stillwater is good at putting lactose use front and center on its labels; Commonwealth Brewing is generally reliable on this too, though I recently discovered its Villuminati Gose, a favorite of mine, has lactose through the brewery’s website and marketing info, not its label.

Every Perennial Brewing Stout is a Milk Stout, which I didn’t learn until I was doing research this week and came across this website that offers shopping advice for vegans. Sure enough, “Contains Lactose” is on every bottle/can, but I didn’t notice until I knew to look for it.

That Kolsch Jace tapped in D.C.? Singlecut’s Hop Sounds, which mentions nothing about lactose on the brewery’s site even though its Strictly Hand-Held Honey Kolsch notes a lactose addition.

So, who labels their lactose use clearly, who doesn’t and why/why not? With luck, I’ll be able to answer that… next time.