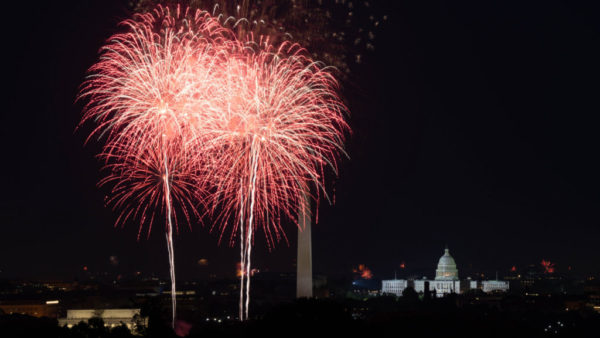 Those flying in and out of Reagan National Airport on Thursday may have their travel disrupted by the July 4 festivities in D.C.

The Federal Aviation Administration announced this morning that non-emergency flight operations at DCA will be suspended from 6:15-7:45 p.m. due to military flyovers and from 9-9:45 p.m. due to fireworks.

President Trump has pushed for an Independence Day celebration “like no other” this year, and his “Salute to America” will feature demonstrations of American military might, an extended fireworks display and a presidential address.

The fireworks and flyovers — of the Navy’s Blue Angels, Air Force One and other military aircraft — will necessitate keeping commercial airliners out of the National Airport flight path for more than two hours over two no-fly periods Thursday night.

“Please check with your airline for flight information,” the FAA said.

FAA Statement: On July 4, the #FAA will suspend operations at @Reagan_Airport from 6:15 p.m. to 7:45 p.m. ET. Operations will also be impacted from 9:00 p.m. to 9:45 p.m. Please check with your airline for flight information. pic.twitter.com/HbLumFNuZJ

That’s not the only disruption at the airport for the Fourth. Due to construction at DCA, those hoping to watch the fireworks from nearby Gravelly Point will not be able to get there from the airport this year.