The hottest beers of the summer are… cheap? And… German?

(A quick note: We’ll pick up the discussion of lactose in beer in the next column — I’m waiting on a couple more responses to give a wider view of how breweries approach using it and labelling it.)

Despite the nature of my job and how long I’ve been doing it (I need no reminders, thank you), I don’t consider myself any kind of “influencer.”

I have breweries and styles I’ll lean into, of course, but more than anything I try to approach my job in a reactive manner. I’m not here to tell our clients at Arrowine what to like; I’m here to play off of what they do like and introduce new things that are exceptional in quality, or value or, best case scenario, both.

So no, you won’t find me on Instagram in selfie after selfie with every can/bottle I drink in the foreground while I attempt a friendly smile in the background. I do notice patterns and trends, though, and I’ll say this: Y’all, something’s happening with Germany.

It started a couple months back with the arrival of .5L cans of Veltins Pilsner. It was an instant hit not only because it’s just damn good, but because came in at $8/4-pack. It’s become a staple in my fridge. 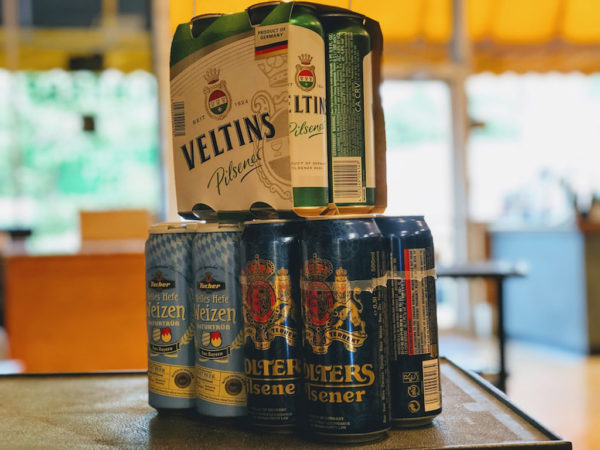 Then, just before Memorial Day, Wolters Pilsner arrived in the same format but at $5/4-pack, followed by Tucher’s Helles Hefeweizen, which delivers clean, easy, classic German Wheat Ale goodness at only $7/4-pack. And there are more on the way.

So what gives? The origins of this wave hitting our shores now can be found back in 1976, the year per capita beer consumption peaked in Germany, dropping one-third in the decades since. Competition for those remaining beer drinkers has driven a price war that has seen German retail beer prices drop to levels nearly half what they were back in the early 90s (adjusted for inflation).

Rather than a temporary method of boosting sales, those low-margin prices have become the new norm. With no more margin to lose and home-market sales continuing to stagnate, German breweries have turned their eyes back to the States, where Mexican beers dominate import sales (accounting for about 70 percent of the American import market) but where “macro” is down, and “craft” continues to grow, albeit slower over the past couple years than the previous 10-15. It’s a perfect moment for these beers, with many transitioning to more Lager-centric drinking preferences and a (for now) quiet but growing exasperation with $20 4-packs and the FOMO mentality.

We’re not in a full-on paradigm shift just yet: I still tell people often that anyone who can get even a half-decent IPA into 16oz 4-packs that retail at $13.99 is going to sell them with little problem. But more people just want to have a couple good beers, maybe even with friends, without having to all-but get them to sign a waiver and without breaking their banks, and these Germans are filling that void.