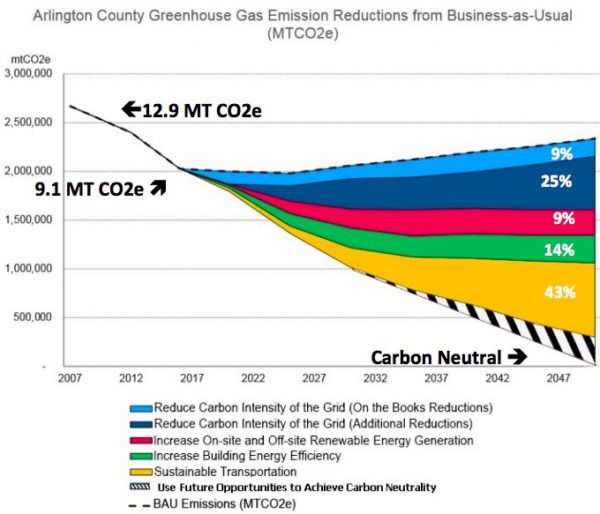 Arlington County is working on plans to be “carbon neutral” by 2050.

The new goal comes is part of an ambitious update to the county’s current Community Energy Plan (CEP). It’s the result of community feedback that the earlier plan didn’t go far enough in addressing energy efficiency concerns, according to a staff report on the plan.

A pair of public hearings on the updates are expected to be scheduled for September at this weekend’s County Board meeting.

Carbon neutrality means reaching net zero metric tons of emissions each year. The idea behind the update is that, in 30 years, any carbon emissions would require some form of carbon offset in equivalent exchange.

The current plan, approved in 2013, targeted reaching three metric tons of CO2e (carbon dioxide equivalent) per capita by 2050. The updated goal relies on technology that is still science fiction as of 2019 and admittedly strains the boundaries of what the County is allowed to promise.

“Arlington’s community leaders point to today’s climate science reports as a need for people to take action and for a stronger, bolder CEP,” the report noted. “It is important to note that Virginia is a Dillon Rule state, that is, local governments have limited authority, and can pass ordinances only in areas where the General Assembly has granted clear authority. A more aspirational 2050 target of zero metric tons of CO2e per capita per year simultaneously pushes the limits local jurisdictions have in Dillon Rule states, and assumes numerous technological advancements and disruptions take place.”

Rich Dooley, Arlington’s community energy coordinator, said the Dillon Rule also means Arlington can’t require developers to build energy-efficient buildings above what is required by the state, they can only continue to offer incentives like bonus density for going above-and-beyond the state’s standards.

Even so, the report on the update points to several places where Arlington could be more energy efficient, from requiring greater levels of energy efficiency in new buildings to prioritizing public transit infrastructure over cars.

Buildings currently use approximately 60 percent of all energy in Arlington, according to the update. The 2013 plan charted a gradual reduction in energy use in residential buildings, ending with 40 percent less energy usage in 2040, compared to 2007 levels. The update shifts that goal to a 38 percent reduction by 2050, compared to 2016 levels.

Dooley noted that the plan is meant to be a high-level look at the goals and policies of the project, and some of the next steps include working on updating the “dated” implementation framework.

The report notes that the specific shift to a carbon-neutral goal by 2050 was partially the result of prodding from the Arlington County Board.

“During its work session deliberations, the County Board members noted the importance of acting now to address climate change while keeping in mind the other important CEP goals,” the update said. “The work session concluded with County Board guidance to staff to show in the 2019 CEP that the community should aspire to become Carbon Neutral by 2050.”

Dooley said that staff initially presented the update as being able to realistically reduce emissions to one metric ton, but the community spoke up at meetings and said the County should commit to going to fully carbon neutral.

“The County Board heard that and said ‘we can go ahead and get it there,'” Dooley said.

If the technology to help Arlington reach its 2050 goals doesn’t materialize over the next few years, Dooley said there carbon offsets the County can purchase.

The update also includes other renewable energy objectives for the nearer term:

But other concerns remain that the plan might not be authorized by the state government or that it might fail to address consumer emissions — emissions associated with the local consumption of products that aren’t created in Arlington.