A rally for airline workers rights drew hundreds to Reagan National Airport, including a number of Democratic presidential hopefuls.

Labor union UNITE HERE helped organize the rally in support of airport catering workers, who are planning a large-scale strike if their demands for better wages and benefits are not met. Presidential candidates Sen. Elizabeth Warren (D-MA), Sen. Bernie Sanders (I-VT), and New York City Mayor Bill de Blasio were among those on hand to support the workers, along with other labor unions and local officials.

“No one should have to choose between healthcare and paying the rent,” Warren called out amid cheers.

The Massachusetts senator’s speech on Tuesday echoed her support for more corporate regulations.

“Giant corporations believe if they just push hard enough the unions will just go away,” she said. Since entering the race in February, Warren has since risen in recent polls to second among the crowded field.

Tuesday’s crowd was equally loud for two-time presidential candidate Sanders, who was ushered to the podium among chants of “We Love Bernie!”

“At a time when corporate profits are a record-breaking level, our demands are simple,” said the senator, who rose to popularity for his stance on economic inequality. “Pay your workers a living wage and provide… affordable healthcare for your workers,” Sanders said.

Sanders noted workers in the D.C. area “cannot live on $10 hour” wages due to the rising costs of living and housing.

“I hear they made $15 billion in profits last year,” de Blasio said of recent airline earning reports. “Are are they sharing that?”

De Blasio, who has generated little enthusiasm for his campaign so far, ended his speech by touting his new “Bill of Rights for Working People.”

The catering workforce authorized the strike earlier in June, but airline workers must gain approval from the federal National Mediation Board for large-scale strikes due to the potential impact on travelers. Workers are seeking to reach a new collective bargaining agreement with the private companies who contract them to assemble the food for airlines: LSG Sky Chefs and Gate Gourmet.

The companies have said they cannot meet the demands for increased wages and benefits, telling the Huffington Post that could “more than double” their costs.

About a thousand union members in red shirts with slogans like “One Job Should Be Enough” gathered in Terminal A to hear the speakers. But it’s not the first time DCA has seen labor unrest. In 2016, service workers nearly went on strike for a $15 minimum wage.

Workers at several other airports nationwide are also asking for permission to strike, according to a map shared by the union. 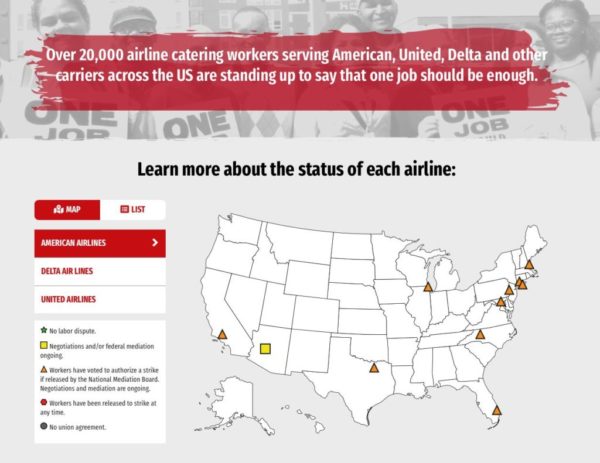 Catering employees Tenai Stover and Eric Brightley, who said they prepare the food and beverages served on DCA and Dulles flights as part of their work at LSG Sky Chefs, each described to ARLnow difficulty making ends meet given the meager pay.

Brightley has worked preparing beverages and snacks for the the company over the last four years and currently earns $11 an hour. He told ARLnow that he thinks managers intentionally under-schedule shifts, resulting in too few people to get the work done.

“We’re constantly at work,” said Brightley, who added workers are only allowed a 15 minute break during their shift.

“The other reason we’re working overtime is to make ends meet,” said Stover, has worked at Sky Chefs for the past three years and currently earns $13 an hour to prepare the meals served on flights.

“Two years ago because of the wages I was evicted from my place,” she said.

Both Brightly and Stover cited the rising expenses of healthcare –which can cost workers up to $300 a month — as a significant source of stress given their low levels of income.

Sen. Sherrod Brown (D-OH) also spoke at the rally, calling the state of airline catering jobs “despicable.” The presidents of the Air Line Pilots Association International and the Association of Flight Attendants (AFA) also spoke in solidarity of the strike, and praised catering workers for being part of the country’s complex system of commercial aviation.

“If the workers in the kitchen cannot do their job, I cannot do my own,” said AFA president Sara Nelson.

Nelson added that one of the biggest problems she heard from catering employees was that “the boss can’t keep the medicine cabinet stocked with Ibuprofen” due to how sore employees often are.

I stand with the men and women of @unitehere! They are right, one job should be enough! Our airline workers feed the world but their families go hungry. It is time for justice! ✊ pic.twitter.com/sEzP7VKaFQ