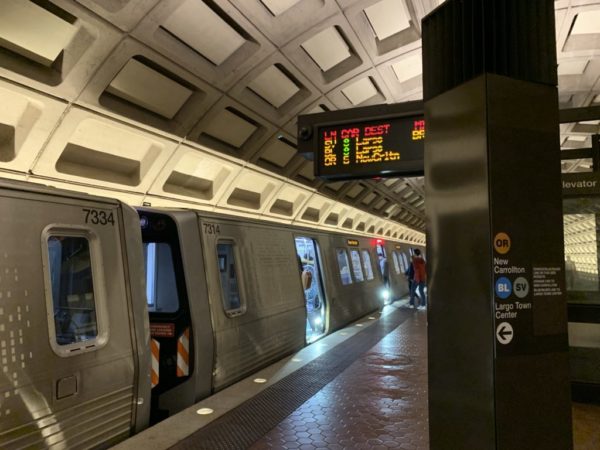 Update at 9:55 a.m. — The issue has been resolved and Blue Line service resolved, Metro says, though residual delays remain.

Earlier: Metro riders are facing delays this morning due to a reported signal problem at the Rosslyn station.

Currently, Metro says the Blue Line is no longer running to Largo and shuttle buses are being requested to run from Rosslyn to the Pentagon. Service at Arlington Cemetery station is said to be suspended.

Delays have also been reported on the Orange, Silver and Blue lines since the problem was first reported around 8 a.m.

UPDATED: Blue Line Delay: Arlington Cemetery: No train service to Largo due to a signal problem at Rosslyn. Buses requested btwn Rosslyn & Pentagon.

As a result of the OR/SV/BL Line disruption, some Blue Line trains will operate as Yellow Line trains between National Airport & Mt. Vernon Sq. Please check destination sign, announcements or next train signs as you board. #wmata

Orange/Silver/Blue Line Delay: Expect delays to National Airport. Vienna and Wiehle-Reston due to a signal problem at Rosslyn.

L’Enfant was chaos, as per usual pic.twitter.com/4yAFUuTxVt

END_OF_DOCUMENT_TOKEN_TO_BE_REPLACED

More Stories
VIDA, CorePower Holding Free Classes in Ballston Ahead of OpeningsAmazon On Track to Hire 400 By The End of 2019