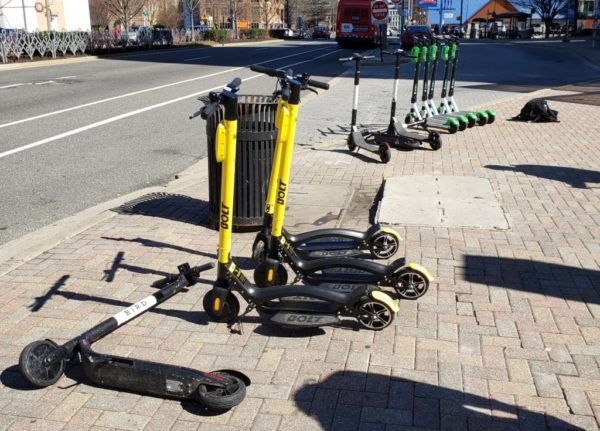 Scooter riders have reported an increasing number of crashes since the county agreed to test the devices last year.

New data from Arlington County Police and the Virginia Department of Motor Vehicles (DMV) indicates that the number of crashes and injuries involving e-scooter riders have increased over time statewide, including in Arlington.

“There have been 12 total collisions involving an e-scooters,” said ACPD spokeswoman Ashley Savage. “Four incidents were reported in 2018 and eight reported in 2019.”

The number of injuries from scooter crashes is also on the rise, according to data ARLnow obtained from ACPD through a Freedom of Information Act request.

The county recently extended its e-scooter and e-bike pilot program through December to continue to study its impacts. Before the program was extended, hundreds complained about concerns over safety sharing sidewalks and roads with the electric-powered devices, among other concerns.

Since the program began in 2018, officials have capped scooter speeds to 10 miles per hour, and required riders to park the devices out of the way of sidewalks and storefronts, and restricted access to some public lands. Perhaps contributing to the rise in scooter incidents: the number of rental e-scooters has increased as more scooter companies have started operating in Arlington.

ACPD’s number of crashes and injuries involving scooters is higher than that recorded by the DMV, which said it received a report of one crash involving a scooter and a car in 2017, and three crashes between scooters and cars in 2018.

Arlington’s four scooter crashes is the most the DMV recorded in any Virginian jurisdiction, closely followed by three crashes in the City of Virginia Beach, which recently created a task force to address safety concerns. Statewide, the DMV recorded seven scooter injuries in 2018, compared to one in 2017, and two in 2016. So far in 2019, the DMV has recorded six injury reports.

Tracking this information statewide is difficult, Brubacker said, because scooter crash crash data must be hand counted by staff reading through crash reports. Staff currently have no way to note in their data management system that an accident includes a scooter.

While the number of scooter crashes remains well below car crashes estimates, the tally is likely to factor in to whether the county chooses to keep the e-scooter program come December.