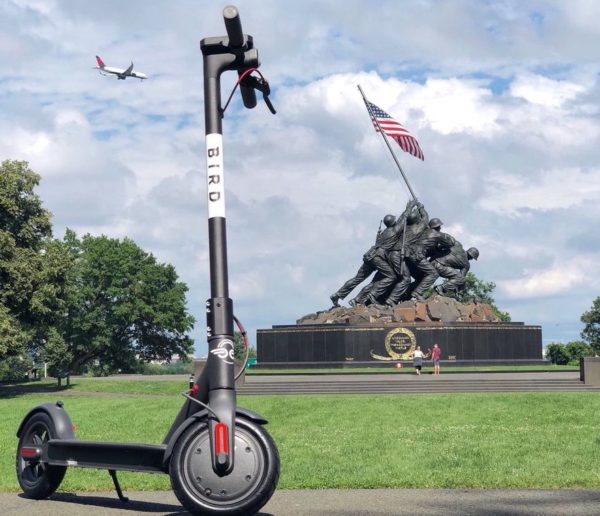 (Updated at 3:40 p.m.) Scooters are all the rage in Arlington now thanks to a newly-extended pilot program, but there are some places they can’t take you.

Geofencing is the limiting of where the scooters can ride or park. Certain areas are set as fenced off by Arlington County government as part of the Shared Mobility Devices (SMD) pilot, according to county transportation spokesman Eric Balliet.

“For now, the County is using geofencing to discourage users from ending their trip and parking these devices in certain areas,” Balliet said. “Based on agency input, the County has requested that SMD companies prohibit parking of their devices at federal lands such as the Pentagon, Arlington National Cemetery, National Park Service lands, and NOVA Parks.”

But enforcement of the geofencing is left to the companies running the scooters.

“SMD companies are handling the parking prohibition in a couple of ways, including charging a fine, suspending accounts for multiple infractions, as well as prohibiting riding through geofenced areas,” Balliet said. “We will soon be providing the companies a map to ensure each is using the same parcel data that accurately reflects the areas where parking is prohibited.”

Geofencing can result in scooters slowing down below a certain speed cap, stopping altogether inside certain boundaries, or not allowing the user to end their ride and park in certain areas, depending on the company’s policy.

But while geofencing is designed to keep scooters inside authorized zones, it may be a contributor to the mysterious spate of abandoned scooters littering certain trails in Arlington. One tipster told ARLnow that the geofences near the U.S. Marine Corps War Memorial near Rosslyn forced him to abandon his scooter into a pile of other scooters at the border of the invisible barrier.

Another hot spot for abandoned scooters: along the Mt. Vernon Trail near Roosevelt Bridge and Gravelly Point.

Nature has begun to reclaim the ⁦@JUMPbyUber⁩ and ⁦@lyft⁩ scooters near the Roosevelt Bridge on national parkland pic.twitter.com/Ij6OcCTkHv

Meanwhile, across the river, one government official is advocating for scooters to be allowed on one particular piece of federal land. Del. Eleanor Holmes Norton (D-D.C.) sent a letter today asking U.S. Capitol Police Chief Steven Sund to allow scooters on the Capitol grounds, where they are currently prohibited.

In her letter, Norton describes scooters as an “affordable, environmentally friendly and efficient mode of transportation relied upon by increasing numbers of Hill staffers, D.C. residents and visitors to our nation’s capital.”