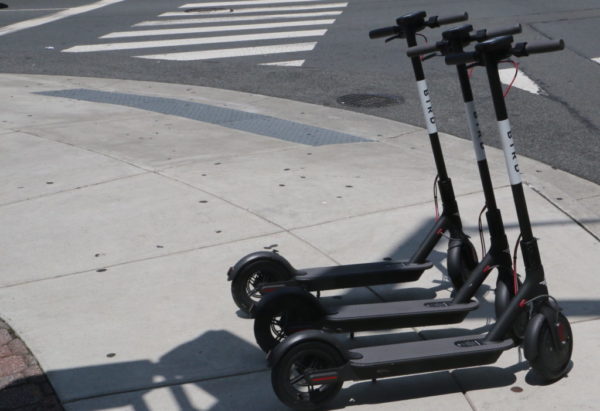 (Updated at 12:25 p.m.) Arlington is rolling out its promised pilot program to guide the use of dockless vehicles, clearing the way for more companies to offer electric scooters and bikes in the county.

County officials have been mulling how best to regulate dockless vehicles since Bird started offering its scooters in Arlington this June without any warning to the local government. Now, the County Board is set to approve a program requiring companies to register with the county to avoid similar surprises, while also capping the number of vehicles they can deploy in Arlington.

The nine-month program limits companies to operating a total of 350 vehicles each within county limits. Under its terms, any business looking to deploy dockless scooters or bikes will have to pay the county $8,000 for an operating permit, and would then be able to operate a fleet of 200 vehicles. The companies could then apply to increase the size of the fleet by 50 vehicles each month, up to the 350 cap, so long as it can demonstrate that each vehicle is recording at least six trips per day.

Those strictures are similar to D.C.’s own strategy for managing dockless vehicles, which the District put in place last year and caps companies at 400 vehicles each. Transportation advocates in the region have been especially critical of those limits, with some companies ditching D.C. due to the caps, and county staff noted in a report prepared for the Board that the county’s own Transportation Commission “recommended that the demonstration refrain from capping numbers of devices.”

.@ArlingtonVA's shared mobility pilot program which is on the Board's "consent agenda" on Saturday (for non-controversial items) would more than halve the # of scooters @BirdRide can have in the County from what it has now. https://t.co/lSJl2oXOit

“This proposal retains what staff considers a reasonable cap, reflecting other community input,” staff wrote. Bird started off its deployment in Arlington with 50 scooters, staff wrote, but the company has declined to release exact numbers on how many vehicles it’s since brought to the county.

Staffers added in the report that county officials consulted with some “vendors” last month to gauge their thoughts on the design of the program. Lime, in particular, has spent months working with local business leaders to ensure a more favorable regulatory environment in the county, while Skip, the third dockless scooter company operating in D.C., has also signaled an interest in expanding to Arlington.

Staff also wrote that they fully expect that this pilot program could encourage the remaining dockless bike companies operating in D.C. — Spin and Jump — to start operating in the county as well.

Additionally, the program clarifies that there is no helmet requirement for scooter riders, the county plans to bar anyone younger than 16 from using the scooters, and that the scooters can’t be used on county sidewalks, without some policy tweaks. The policy also adds that both scooters and electric bikes won’t be permitted on county trails.

The county is also planning on collecting community feedback on all manner of dockless vehicle issues, and will require the companies themselves to regularly turn over ridership data, which can then be released publicly.

The Board first has to sign off on the policy at its meeting Saturday (Sept. 22). It’s currently slated to be considered as part of its consent agenda, generally reserved for non-controversial items to be approved as a block, though it can be pulled from the consent agenda at the request of Board members.