(Updated at 4:45 p.m.) An Arlington man has been arrested and charged with murder after a woman fell from an upper floor of a Crystal City hotel early this morning.

Police were called to a hotel on the 1300 block of Richmond Highway — which corresponds to the Embassy Suites by Hilton Crystal City National Airport — for a report of a woman who fell from a height onto the hotel lobby below. 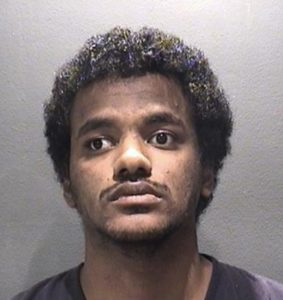 The victim, who died at the scene, was identified as 63-year-old Arlington resident Zelalem Abedje. Following an initial investigation, police arrested a 27-year-old man for murder.

“The circumstances preceding the fall remain under investigation,” police said in a press release, below. “Tebebe Makonnen, 27, has been charged with Murder and is being held in the Arlington County Detention Facility on no bond.”

Last year Makonnen was arrested in Arlington and charged with sexual battery in connection with a reported assault of a woman inside a local medical office.

Including today’s incident, there have been three homicides in Arlington County in 2019 so far.

Arlington County Police announce the arrest of an Arlington man following a suspicious death investigation in Crystal City. Tebebe Makonnen, 27, has been charged with Murder and is being held in the Arlington County Detention Facility on no bond.

At approximately 1:38 a.m. on August 20, police were dispatched to the 1300 block of Richmond Highway for the report of an EMS assist. Upon arrival, an adult female was located deceased inside the lobby of a hotel after falling from an upper floor. The circumstances preceding the fall remain under investigation.

The victim has been identified as Zelalem Abedje, 63, of Arlington, Virginia. Cause of death will be determined by the Office of the Chief Medical Examiner.

This remains an active criminal investigation. Based on the preliminary investigation, this appears to be an isolated incident with no ongoing threat to the public.

Anyone with information related to this incident is asked to contact Detective R. Munizza of the department’s Homicide/Robbery Unit at 703-228-4171 or [email protected] Information may also be provided anonymously through the Arlington County Crime Solvers hotline at 1-866-411-TIPS (8477).