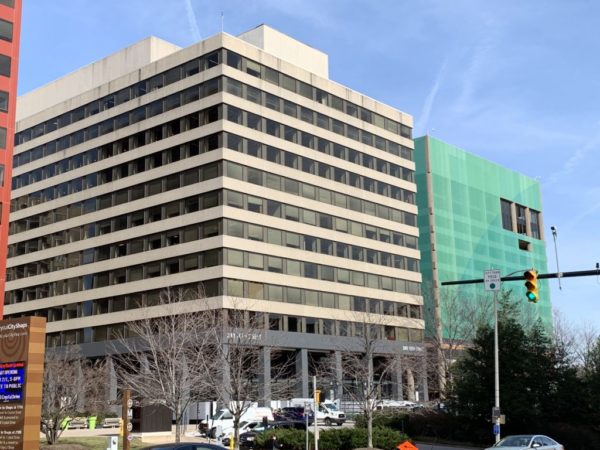 The University of Maryland is expected to open a research and event space in Crystal City next fall in an effort to cozy up to Amazon.

Called the “Discovery Center,” the campus will occupy a 8,000-square-foot space in a building Amazon has leased from JBG Smith and plans to begin temporarily occupying this year. University officials say that the center is designed to connect students and staff with companies like Amazon for research and job recruitment, as first reported by the Washington Business Journal.

“This new space will help connect our flagship researchers and students with this emerging technology hub, fostering innovation in our growing Cyber Valley,” UMD President Wallace Loh said in a statement.

UMD described the purpose of the space in a press release:

The Discovery Center will provide spaces for academics, local businesses and community residents to interact and exchange ideas, as well as seminar rooms, a strategic planning and creative problem-solving center, spaces for students to work with industry partners, and career development interview rooms to facilitate internships and employment opportunities. The center will also function as an event space for researchers, industry leaders and alumni to meet, network and discuss industry trends.

Both Prince George’s County, where UMD is located, and Montgomery County were hopefuls for the 25,000 jobs Amazon promises to bring. Now that the tech and retail giant has inked its HQ2 deal in Arlington and is beginning to hire employees, the university appears to be trying to locate itself closer to the action.

“Although we wanted Amazon to choose Maryland, the fact is they chose, of all the places in the country that they could have chosen, they chose 11 miles from the flagship campus of the flagship university of the state of Maryland,” UMD’s chief strategy officer Ken Ulman, told the college newspaper Diamondback.

Although the space is not a formal college campus per se, the university says it will host “learning events” on topics likely to interest the company, including supply chain management, machine learning, and cybersecurity.

JBG Smith is using the ground floor of the building, at 241 18th Street S., as a pitch room to convince other office tenants to locate to Crystal City.

Earlier this summer, Virginia Tech finalized the details of its Potomac Yard campus, also strategically planned near Amazon. The Alexandria campus, which joins the university’s other locations in Ballston and West Falls Church, was a feature of Virginia’s pitch to Amazon. Last week VT announced that it had launched a search process to find a new leader for the planned “Innovation Campus.”

UMD is expected to benefit from Metro’s decision to start extending Yellow Line rail service all the way to Greenbelt for the first time since 2017, which will connect the university’s flagship location in College Park to Crystal City.

“With Metro’s Yellow Line extension, folks can go from campus to the Discovery Center in 30 minutes without changing trains,” Ulman said in a statement. “You’ll walk out of the Crystal City station, turn and literally see the University of Maryland sign in front of you.”