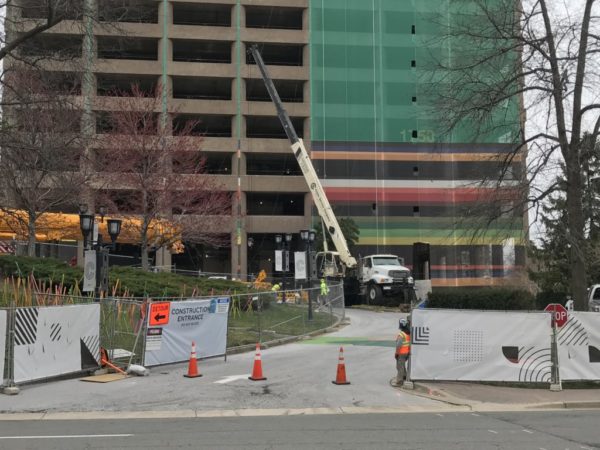 (Updated at 9:30 a.m.) JBG Smith has made it official with Amazon, announcing this morning the signing of lease and development agreements with the tech and retail giant.

The announcement should put to rest any speculation that Amazon could pull out of its HQ2 plans in Arlington, as it did in New York City.

Construction has already started on Amazon’s three temporary leased office buildings in Crystal City, with the company expecting to move into two of the buildings — 241 18th Street S. and 1800 S. Bell Street — later this year.

Amazon is also buying a pair of large development sites in Pentagon City from JBG Smith — sites that JBG will help develop into a permanent second headquarters campus for the company. The sale price of the vacant Metropolitan Park and PenPlace properties, each two blocks from the Pentagon City Metro station: just under $300 million.

“We are pleased to report that our partnership with Amazon at National Landing is moving full steam ahead,” JBG SMITH CEO Matt Kelly said in a press release, below. “With the execution of these agreements and recently legislated state and local government commitments to invest approximately $2 billion in the region’s transportation, education and housing infrastructure, we are ready to welcome Amazon’s first National Landing employees in the coming months.”

JBG SMITH (NYSE: JBGS), a leading owner and developer of high-quality, mixed-use properties in the Washington, DC market, today announced that it has executed three leases and two Purchase and Sale Agreements with affiliates of Amazon.com, Inc. in conjunction with the creation of Amazon’s HQ2 at National Landing in Northern Virginia.

These agreements are the result of Amazon’s announcement in November 2018 that it had selected JBG SMITH as its partner to house and develop its HQ2 locations after a comprehensive, year-long search that included proposals from 238 cities across North America.

JBG SMITH and Amazon have also executed Purchase and Sale Agreements for two of JBG SMITH’s National Landing development sites, Pen Place and Met 6, 7, and 8, which will serve as the initial phase of new construction associated with Amazon’s HQ2. Subject to customary closing conditions, Amazon will pay $294 million for the sites, or $72 per square foot based on their combined development potential of 4.1 million square feet. JBG SMITH, which has flexibility on the timing of closing to facilitate 1031 exchange opportunities, expects to close on the Mets land sales as early as 2019 and on Pen Place as early as 2020. JBG SMITH will also serve as Amazon’s developer, property manager, and retail leasing agent for these assets.

“We are pleased to report that our partnership with Amazon at National Landing is moving full steam ahead,” said JBG SMITH CEO, Matt Kelly. “With the execution of these agreements and recently legislated state and local government commitments to invest approximately $2 billion in the region’s transportation, education and housing infrastructure, we are ready to welcome Amazon’s first National Landing employees in the coming months.”

In January 2019, the Virginia General Assembly overwhelmingly approved incentive legislation associated with HQ2 to fund $195 million toward critical infrastructure improvements, including second entrances to the Crystal City and to-be-constructed Potomac Yard Metro stations, a pedestrian connection linking National Landing to Reagan National Airport, an expanded VRE station and substantial improvements to Route 1. These investments are in addition to $570 million of regional government commitments for transportation infrastructure and transit improvements, and they follow the regional compact from mid-2018 to invest $500 million annually in Metro system improvements.

In March 2019, the Arlington County Board also unanimously approved a $23 million performance agreement with Amazon. Both packages provide post-performance incentives for Amazon to create up to 37,850 jobs with an average annual salary of $150,000 and occupy at least six million square feet of office space in Arlington County.

In addition, the County of Arlington, the City of Alexandria and the Commonwealth of Virginia have collectively dedicated $225 million to fund a range of low-income and workforce housing initiatives over the next decade.