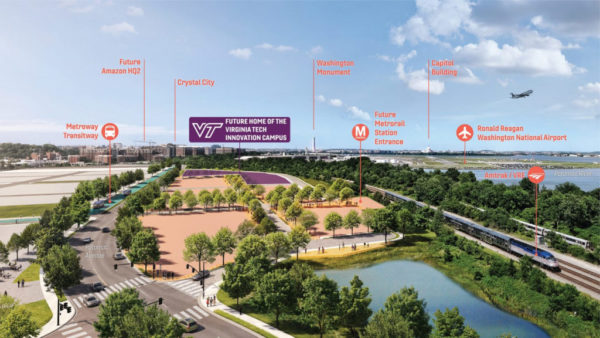 Virginia Tech announced today that it will build its latest campus in Potomac Yard, just across the border from Arlington in Alexandria and within close proximity to Amazon’s HQ2.

The university will be building a 1.5 million-square-foot, graduate-level “Innovation Campus” on a 15-acre property near the Regal movie theater, across Potomac Avenue from the Potomac Yard shopping center. The property is being developed by Lionstone and JBG Smith, which recently inked its deal with Amazon.

The campus was part of the state’s pitch to woo Amazon and joins the university’s other Northern Virginia facilities in Ballston and the West Falls Church.

“The first class of Innovation Campus master’s degree students will enroll in the fall of 2020 in existing space adjacent to where its new academic buildings will eventually be built,” the university said in a press release. “When complete in about 10 years, the campus will enroll 750 master’s candidates and hundreds of doctoral students and postdoctoral fellows.”

Virginia Tech President Dr. Tim Sands said today (Monday) that he was “extremely pleased” about the location and its proximity to Amazon’s headquarters across Four Mile Run.

“It is the ideal location to support Virginia Tech’s bold plan to develop new tech talent, disciplines, programs, and human-centered research that will shape the economic future of the commonwealth and beyond,” he said. 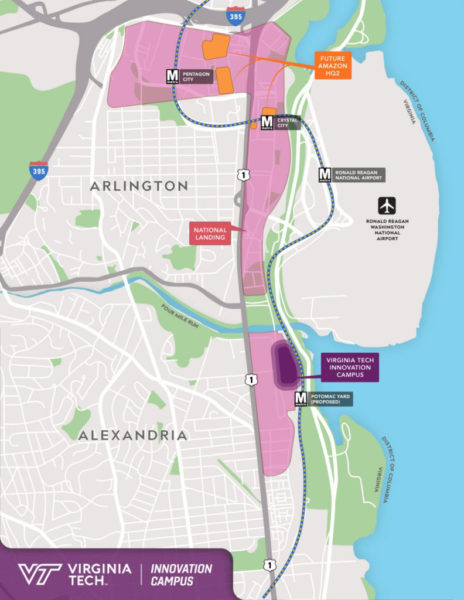 “The campus’s strategic location, on 15 acres just south of the Four Mile Run stream that separates Alexandria and Arlington, positions Virginia Tech and its future partners near the nation’s capital, diverse industries, and leading tech companies, including Amazon and its HQ2 project,” the university noted in its press release.

“The campus will include academic classrooms, incubator space for new startups and research and development, offices for industry collaboration, and convening space for alumni events,” the press release said. “The development plans call for public open space and ground-floor retail, knitting the campus into the fabric of Alexandria.”

The campus will ultimately be part of a 65-acre mixed-use development, with the planned redevelopment of the big-box shopping center.

Amazon’s arrival renewed a funding push for Potomac Yard Metro station project as well as a proposed second entrance to the Crystal City Metro station earlier this year, though fluctuating cost estimates have made the details of the Potomac Yard project murky.

Development officials in Arlington and Alexandria previously hoped Potomac Yard and Crystal City would help attract Amazon. During an August Bisnow event, they noted that even with Four Mile Run drawing a municipal boundary between the two neighborhoods, developer JBG Smith owned large properties throughout the two regions and transportation projects made the area a prime spot for large-scale commercial development.

“If we can’t get it, we turn around and ask the next Fortune 100 company about their expansion plans,” Stephanie Landrum, president and CEO of the Alexandria Economic Development Partnership, said of the Amazon selection process at the time.

During a Sunday event in Arlington about using tax revenue from Amazon to preserve affordability and equity in the area, Alexandria Mayor Justin Wilson said he was “excited” about the new campus and what it can do for the region.

Wilson added that Sands is “under extreme pressure” from Commonwealth leaders to diversify the stream of tech workers in the state.

“And we said, here are we,” Wilson said of Alexandria. “We are a school system of 62 percent free and reduced lunch and 32 percent English language learners. We can help you do that.”