Virginians for Organized Interfaith Community Engagement called on officials to dedicate portions of their revenue from Amazon to solve long-standing issues like Arlington’s affordable housing squeeze and ever-growing school enrollment.

The so-called “Community First Initiative” calls for Arlington County to earmark the first $10 million it receives from Amazon tax revenue to invest in affordability and equity, and dedicate 50 percent of all future revenue to the same.

“This would bring upwards of $232 million by 2035,” noted a VOICE press release on the proposed initiative, adding that leaders needed to start investing in solutions now because, “affordable housing and places are disappearing too fast. Too many residents are already being pushed out.”

Officials have estimated that Amazon will net the county $342.3 million in combined tax revenue over the next 16 years. 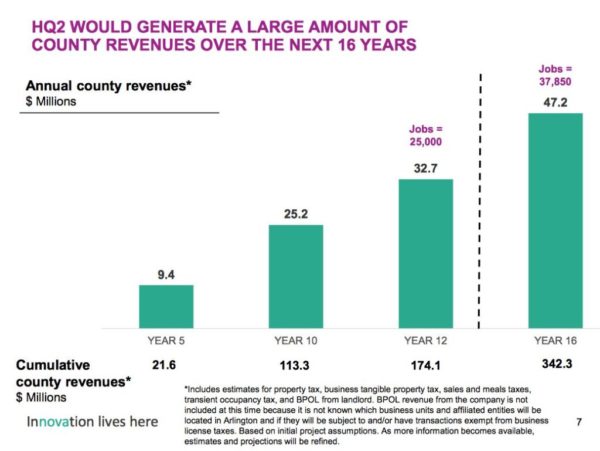 Arlington Board Chair Christian Dorsey and Alexandria Mayor Justin Wilson both expressed general support for the plan during a planned event at Wakefield High School yesterday, though Dorsey disagreed about the specific funding mechanism proposed.

VOICE asked officials to invest in their communities by taking a loan out on the revenue the county expects to earn from Amazon’s second headquarters, making use of the county’s high bond ratings.

“The whole idea that you bond against revenues that you anticipate to come, but that you don’t have a definite stream, that’s not something that’s done affordably for a community, nor would I ever recommend that we do something like that,” said Dorsey, who added that he would look into alternative funding mechanisms like general appropriations during next year’s budget negotiations.

Arlington County Board members passed a $1.4 billion budget two months ago that increased funding for the county’s Affordable Housing Investment Fund to $16 million for the next fiscal year, up from $14.3 million currently.

The investment came after a contentious hearing in March over the county’s incentive package for Amazon, which includes up to $23 million in incentives to Amazon over the next 15 years and up to $28 million in local transportation project funding. Protesters disrupted the meeting several times to express fears that the community needed more investment in affordable housing to combat gentrification that could be caused by Amazon’s arrival.

“Will I work with VOICE to dedicate at least half of all additional revenues that come from Amazon’s investments in Arlington priorities in equity and inclusion, among which are the proposals you have generated? The answer is unequivocally yes,” Dorsey said on Sunday.

Alexandria Mayor Justin Wilson, who joked it was “great to be across Four Mile Run in his second favorite Virginia jurisdiction,” told the audience that he too was committed to continuing conversations with VOICE, tech leaders, and Virginia Tech, which is planning to build a new 65-acre tech campus in Alexandria close to Amazon’s new headquarters.

The funding proposal comes at a time when local budgets have been squeezed by growing expenses.

In October, a combination of office vacancy, increased student enrollment, and growing Metro funding led Arlington officials to predict a $78 million budget shortfall for the county. The gap was later offset in the final budget by a combination of funding from Amazon revenue and a tax hike. This avoided proposed cuts to arts and several school programs.

“The result of that has meant that it is social services, it is the safety net, it is the programs that support our low-income residents, our communities of color, that have been on the chopping block every year in both these communities,” Wilson said Sunday. “So the reason that we’re pushing for this kind of growth is to ensure the we have the resources to support the services that are in alignment with our values.”

“No, I will not make a commitment,” said Alexandria City Council Member Mohamed E. Seifeldein. “But I will fight because, commitment means you’re just going to try to do it. Fighting is what you want to hear from people.”

A moderator for the event also asked whether Dorsey, who sits on the Metro Board of Directors, would pledge to look at building affordable housing on Metro-owned land around East Falls Church station, among other Virginia stations. It’s a cause that VOICE has supported for years.

“When it comes to looking at WMATA and land devoted to affordable housing, that is the true benefit of publicly-held property: it comes at a price value that allows us to create affordability,” Dorsey said. “So the answer to that is absolutely yes.”

Mayor Wilson also said he supported the idea, but cited difficulties in bringing such projects to fruition.

When asked about the land around Braddock Road Metro station, the Alexandria official said the city needs to approve a residential zoning change because the property is currently only zoned for commercial development.

About 200 area residents turned up for the Sunday meeting, ducking into the high school under the sheets of rain that pelted the region throughout the afternoon. Many were from the Unitarian Universalist Church of Arlington, though representatives from several synagogues and mosques also attended.

One attendee was VOICE member and long-time Arlington resident Gail Freunch. She told ARLnow she wanted to come out and support the cause because “the natural instinct” of politicians and corporations is not always to share as much as she would like them to. “I believe that everything works best for those who have the most, and fairness means sharing.”

Another attendee was Arlington resident Yassmina, who brought her three children with her. Yassmina’s oldest daughter, Lara, is an eighth-grader at Thomas Jefferson Middle School who said she’s worried that Amazon’s arrival may crowd the county’s schools and wanted to attend the Sunday meeting to learn more about the issue.

Yassmina said her family used to live in Alexandria but left four years ago after rents rose and Arlington’s school system offered better opportunities for her children. She said she fears Amazon will bring the same pressures to her new home. “If I can’t afford the rent I will have to move out.”