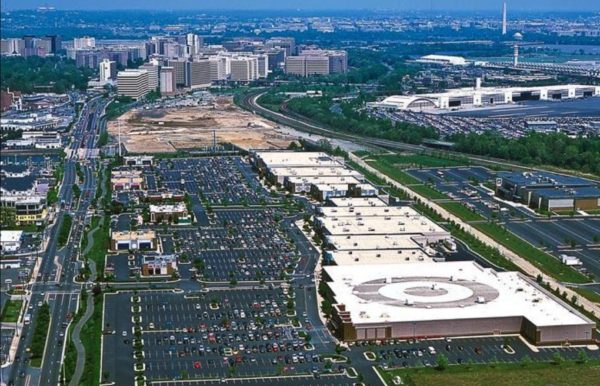 Though they may not share the same zip code, Arlington’s Crystal City and Alexandria’s Potomac Yard are bound together in the pursuit for Amazon’s second headquarters — and, win or lose on HQ2, the area’s business community is looking to strengthen those ties in the future.

Four Mile Run may separate the two neighborhoods, but real estate giant JBG Smith controls vast swaths of property in both neighborhoods, helping the company pitch Amazon on the area’s potential. With Potomac Yard becoming a development hub for the city, and Crystal City’s commercial office space emptying out a bit, the combination could be enticing enough to win out over the region’s other offerings.

“They had the largest [space] requirement we’ve seen in economic development, ever,” Stephanie Landrum, president and CEO of the Alexandria Economic Development Partnership, said during Bisnow’s “Future of Alexandria” event today (Thursday). “But there is enough square footage here to absorb that company and their requirement.”

Undeniably, Jeff Bezos’ big decision looms over any discussion of the area’s future. But, as Landrum points out, the same factors that made Crystal City and Potomac Yard attractive to Amazon will surely be enticing to other big companies.

“If we can’t get it, we turn around and ask the next Fortune 100 company about their expansion plans,” Landrum said.

That’s a big part of why business leaders are increasingly keen on unity among the various communities along the Potomac River.

Rob Mandle, chief operating officer of the Crystal City Business Improvement District, points out this organization has embraced Potomac Yard as it courts new companies, and even started to market Pentagon City in conjunction with those neighborhoods as well.

Though the areas may not be especially connected now, with transit and walkability a constant challenge, Mandle points out that, taken together, the combination of the three neighborhoods represents “the largest downtown in the entire commonwealth.”

He notes that, in terms of sheer size, the trio rivals downtown areas in mid-size cities like Indianapolis or Austin, Texas — and with the area still hurting from its loss of federal tenants, straining county coffers in the process, he’s hoping a more interconnected pitch can make a difference.

“We’re really working to articulate that to the marketplace,” Mandle said. “We see it as this seamless urban corridor between Braddock Road and Pentagon City.”

Robert Vaughn, vice president of development at JBG Smith, noted that such a connection certainly makes sense for his company.

Much of JBG’s property in Potomac Yard is residential, and he sees its “target renter” as being anywhere from 25 to 35 years old, likely working at the Pentagon or for some other government contractor based in Arlington (perhaps even in one of JBG’s commercial properties in Crystal City).

Rosslyn-Ballston corridor has traditionally been the prime area drawing in millenials interested in walkable, transit-oriented communities. That’s why Vaughn expects a similar focus on walkability could help the new combination of Crystal City, Potomac Yard and Pentagon City become attractive to that very lucrative constituency instead.

“Even though we’re all tied to our phones, we don’t want to just sit and look at our phones in our living rooms all day,” said Bill Dickinson, executive director of brokerage at Rappaport, another large regional developer. “It’s about creating space to get people out there.”