That said, I have to level with you all: craft beer in 2019 is making me go a little negative, and I’m not loving it.

A couple weeks back, I had an impromptu Hazy/Juicy IPA shootout with six different beers, none of which I’d had before. Four were samples from distributors; two were from a very sought-after Haze producer and were gifted to me by one of our Arrowine regulars.

Two of the beers were “flawed” — showing obvious errors in production. Another two, from the brewery that has lines of people waiting to stock up every day, were totally out of whack. One of them so misused the Nelson hop that it smelled and tasted like the cheap weed that guy at the party who’s a friend of the host who you kinda know but aren’t 100% comfortable with offers you — and not in a good way.

The other was an extra-hoppy variant of their flagship Hazy IPA. If clone recipes are to be believed, Apollo and Citra hops are prevalent in this beer, both of which can go vegetal used in too high concentrations at the wrong times. Sure enough, it started well enough before going very green onion-y on the back palate. So close. So close.

The last beer was the sole bright spot of the tasting: a flagship New England IPA from a Virginia brewery that showed a vibrant palate of tropical/lemony hop flavors laid upon a delicate grist of pale malts, oats and wheat, with a hint of eucalyptus adding something unexpected and welcome.

Trying a variety of IPAs these days, one finds there are some brewers who really know what they’re doing, but even more who know what they’re doing — cranking out untested/unrefined recipes often producing flawed beers. I don’t care if a brewery is chasing the FOMO crowd and putting out a ton of IPAs every week; I care that those IPAs are fundamentally well-made, able to be judged on their own merits, and not turning new beer lovers off to the style, or beer in general.

For the sake of not being entirely negative, I’ll shout out a couple beers I’ve recently enjoyed, starting with New Realm’s Hazy Like A Fox — the one beer of those six mentioned above that was a highlight. When a brewery’s co-founder and brewmaster literally wrote the book on making IPA, I guess it’s no surprise. 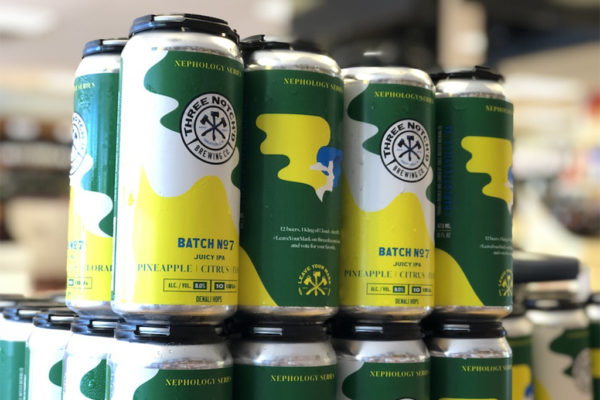 Earlier this week, I got to preview Three Notch’d Brewing’s Nephology Batch 7 IPA (pictured above), the latest in a monthly series of Juicy/Hazy IPAs. Batch 7 features Denali, a relatively new hop variety that I’ve grown fond of in production beers and in my own occasional homebrews.

At 8% ABV, it’s a lush showcase for Denali’s candied, pineapple-y aromas and flavors, but avoids hop burn or coming across as too “heavy.” It’s hitting the market this week and well worth checking out.

Bottom line: there’s a world of good stuff out there right now, but don’t let the hype tell you what’s good. Trust your palate, and if you have an interest, learn more about off-flavors and flaws to help you better discern what’s good versus what’s bad versus what’s flawed.